Alderson weighs in on Tejada, Drew
8yAdam Rubin
A fans guide to abiding the LOL Mets
14dDevin Gordon
Jeff Passan answers 20 burning questions about the MLB playoffs
14dJeff Passan
What's next for the New York Mets after Luis Rojas' departure
16dBradford Doolittle and David Schoenfield
Mets move on from Rojas after 3rd-place finish
16d
Mets likely to make Rojas decision before others
21d
MLB Power Rankings: Where all 30 teams stand in the final week
20dESPN.com
Mets give Syndergaard start, shut deGrom down
22d
Your squad isn't going to the MLB playoffs? The No. 1 offseason question for each eliminated team
16dBradford Doolittle
Passan's early MLB free-agency tiers: Which stars are going to get paid this winter?
21dJeff Passan
MLB Power Rankings: Where all 30 teams stand as playoff picture comes into focus
27dESPN.com
Prospects who have taken the biggest step forward in 2021 for all 30 MLB teams
29dKiley McDaniel
Feb 26, 2014 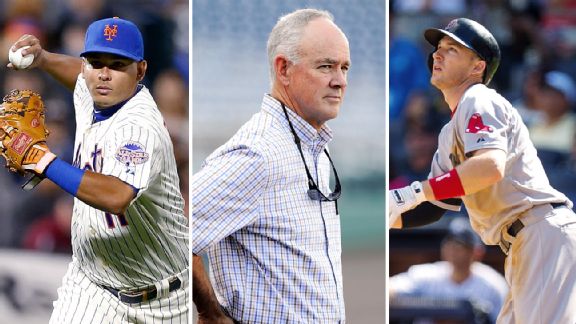 "Look, we have probably 30 front office and coaching staff down here. There's going to be a stray comment about players from time to time," Alderson told MLB Network. "That's unfortunately the nature of the media in New York. It's so pervasive that comments like that are going to be gleaned from time to time.

"We were happy with what Ruben did in the offseason. We're hopeful that he'll show significant improvement on the field -- back to the levels he has demonstrated, so it's not an unrealistic hope. But we continue to look at our middle-infield situation.

"There's been a lot of talk about Stephen Drew obviously. My own personal view is at this point, Stephen and his agent are reviewing the situation and perhaps looking at a strategy that prolongs this situation into the regular season or even into June. I have no idea at this point, but I do think in light of Nelson Cruz's contract (one year, $8 million) that they're probably reconsidering where they are. That doesn't mean they're going to do a similar deal. But I do think there will be some reevaluation going on.

"From our standpoint, look, it does appear that we would be a logical landing spot for someone like Stephen Drew. But, at the same time, we have to make our own, independent evaluation and cost-benefit computation and act accordingly, which is what we have done."