D-backs covet young catcher for extra SS
8yAdam Rubin
Carrasco has bone fragment removed from elbow
5h
A fans guide to abiding the LOL Mets
15dDevin Gordon
Jeff Passan answers 20 burning questions about the MLB playoffs
15dJeff Passan
What's next for the New York Mets after Luis Rojas' departure
16dBradford Doolittle and David Schoenfield
Mets move on from Rojas after 3rd-place finish
16d
Mets likely to make Rojas decision before others
21d
MLB Power Rankings: Where all 30 teams stand in the final week
21dESPN.com
Mets give Syndergaard start, shut deGrom down
22d
Your squad isn't going to the MLB playoffs? The No. 1 offseason question for each eliminated team
17dBradford Doolittle
Passan's early MLB free-agency tiers: Which stars are going to get paid this winter?
22dJeff Passan
MLB Power Rankings: Where all 30 teams stand as playoff picture comes into focus
28dESPN.com
Prospects who have taken the biggest step forward in 2021 for all 30 MLB teams
30dKiley McDaniel
Feb 26, 2014 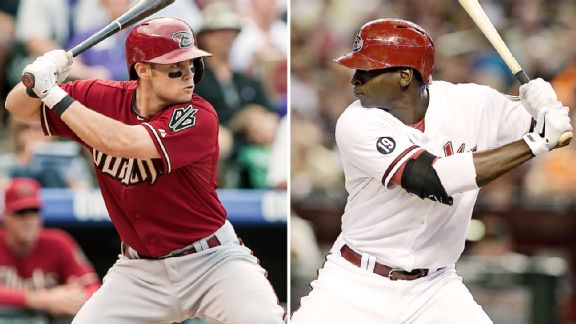 Like the Mariners, the Diamondbacks have two MLB-ready shortstops: Chris Owings and Didi Gregorius.PORT ST. LUCIE, Fla. -- While the trade attention has been on a potential match for the Mets in Seattle middle infielder Nick Franklin, the Arizona Diamondbacks also have an extra shortstop.

Will Arizona trade either Chris Owings or Didi Gregorius during spring training?

"It's been pretty quiet of late," Diamondbacks GM Kevin Towers told Nick Piecoro in the Arizona Republic. "With Stephen Drew still out there right now, I haven't had much trade discussions."

The industry scuttlebutt is that Towers would drive a hard bargain with the Mets because of a less-than-harmonious experience working for Sandy Alderson with the San Diego Padres.

"For us, it would have to be the right deal," Towers told Piecoro about the possibility of trading a shortstop. "Our biggest needs in our system are catching -- if it's the right, top-notch catching prospect, someone we could have right behind Miggy [Miguel Montero]. More of an upper-level guy. Maybe a top, upper-end starter. We have a lot of bullpen depth, infielders. Maybe an outfielder, but probably more catching and Double-A, Triple-A type starter."