Could Wilmer sneak onto Mets bench?
8yAdam Rubin
A fans guide to abiding the LOL Mets
12dDevin Gordon
Jeff Passan answers 20 burning questions about the MLB playoffs
12dJeff Passan
What's next for the New York Mets after Luis Rojas' departure
13dBradford Doolittle and David Schoenfield
Mets move on from Rojas after 3rd-place finish
13d
Mets likely to make Rojas decision before others
18d
MLB Power Rankings: Where all 30 teams stand in the final week
18dESPN.com
Mets give Syndergaard start, shut deGrom down
19d
Your squad isn't going to the MLB playoffs? The No. 1 offseason question for each eliminated team
14dBradford Doolittle
Passan's early MLB free-agency tiers: Which stars are going to get paid this winter?
19dJeff Passan
MLB Power Rankings: Where all 30 teams stand as playoff picture comes into focus
25dESPN.com
Prospects who have taken the biggest step forward in 2021 for all 30 MLB teams
27dKiley McDaniel
Mar 5, 2014

PORT ST. LUCIE, Fla. -- Terry Collins looks at his bench and knows it needs a little more thump. So the manager suggested Wednesday he would like to give Wilmer Flores consideration for the backup middle-infielder role, provided a starter is not still acquired that pushes Ruben Tejada into that reserve role. 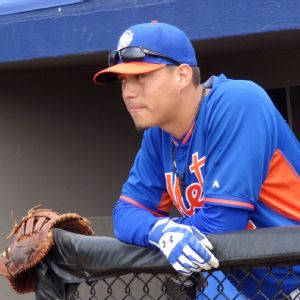 Wilmer Flores started at second base Wednesday against the Nats, not at shortstop.

That leaves one spot for a backup shortstop.

And the hope is that the Mets can find someone passable enough on defense who can contribute off the bench with his bat.

Could it be Flores?

Well, so far the Mets have only given Flores a couple of games mopping up the final couple of innings at shotstop. But team officials have promised to give him a legitimate look.

The more likely scenario still probably has Flores opening as the Las Vegas second baseman. In that scenario, and given status quo otherwise with the roster, Anthony Seratelli may be the favorite over Omar Quintanilla, who is not exactly an offensive threat.

Seratelli, of course, would be a 31-year-old rookie. But he is a switch-hitter. And he did hit .273 with 11 homers, 41 RBIs and 24 steals last season at Triple-A Omaha. He also had a .395 on-base percentage, which probably has this front office drooling.

Maybe not to the extent of Flores, but Seratelli also must prove he has the range to handle shortstop -- at least at some modest level. He has 157 career minor-league games at shortstop, but last year primarily was used in the outfield.