Alderson weighs in on shortstop 'situation'
8yAdam Rubin
A fans guide to abiding the LOL Mets
10dDevin Gordon
Jeff Passan answers 20 burning questions about the MLB playoffs
10dJeff Passan
What's next for the New York Mets after Luis Rojas' departure
11dBradford Doolittle and David Schoenfield
Mets move on from Rojas after 3rd-place finish
11d
Mets likely to make Rojas decision before others
16d
MLB Power Rankings: Where all 30 teams stand in the final week
16dESPN.com
Mets give Syndergaard start, shut deGrom down
17d
Your squad isn't going to the MLB playoffs? The No. 1 offseason question for each eliminated team
12dBradford Doolittle
Passan's early MLB free-agency tiers: Which stars are going to get paid this winter?
17dJeff Passan
MLB Power Rankings: Where all 30 teams stand as playoff picture comes into focus
23dESPN.com
Prospects who have taken the biggest step forward in 2021 for all 30 MLB teams
25dKiley McDaniel
Mar 12, 2014 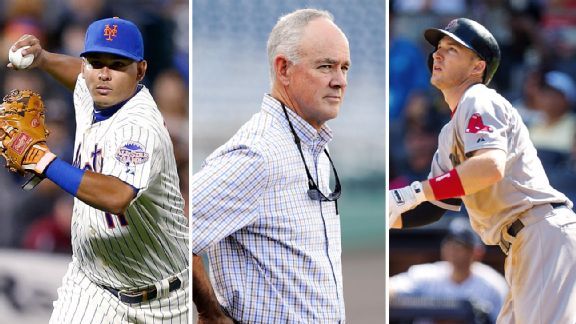 Ruben Tejada has struggled early, but Sandy Alderson has not pulled the trigger on signing Stephen Drew ... yet.PORT ST. LUCIE, Fla. -- What does Ervin Santana signing for one-year at $14.1 million and the Atlanta Braves forfeiting a draft pick mean for the Mets’ pursuit of Stephen Drew, who similarly turned down a qualifying offer and is currently unemployed?

“I’m not interpreting it in terms of ‘our situation,’” Sandy Alderson told reporters Wednesday. “I don’t know that we have a situation here.”

Alderson had said Saturday that Ruben Tejada is not under a microscope. Since then, Tejada committed another error Monday.

Yet Alderson’s stance has not considerably changed.

Alderson said he could see Drew holding out beyond Opening Day, to ensure he cannot be given a qualifying offer next offseason as a free agent. But Alderson does not believe Drew would hold out past this June’s draft in order to wriggle free of the 2014 draft pick a team would have to forfeit if it signed him now.

“That looks a little less viable since a good part of the season has come and gone,” Alderson said about waiting until June.

As for the viability of Wilmer Flores at shortstop, Alderson brushed aside a first-inning muff on a double-play attempt Tuesday.

“I thought he was fine,” Alderson said about Flores’ first start at the position since 2011. “I’m not smart enough based on the first-inning bobble to know that he can’t play shortstop.”

As for the inactivity of Ike Davis and Lucas Duda and how that affects the first-base evaluation, the GM added: “It changes things pretty radically, the fact that they haven’t been out there, or haven’t been out there very much. We have a couple of weeks -- almost three weeks -- left. Hopefully they’ll get back out there. But I think, given the fact it’s a truncated version of spring training for both of them, you’ve got to be cautious about making judgments. So we will be.”