Source: D-backs peddling Didi, not Owings
8yAdam Rubin
Carrasco has bone fragment removed from elbow
7d
A fans guide to abiding the LOL Mets
21dDevin Gordon
Jeff Passan answers 20 burning questions about the MLB playoffs
21dJeff Passan
What's next for the New York Mets after Luis Rojas' departure
23dBradford Doolittle and David Schoenfield
Mets move on from Rojas after 3rd-place finish
23d
Mets likely to make Rojas decision before others
28d
MLB Power Rankings: Where all 30 teams stand in the final week
27dESPN.com
Mets give Syndergaard start, shut deGrom down
29d
Your squad isn't going to the MLB playoffs? The No. 1 offseason question for each eliminated team
23dBradford Doolittle
Passan's early MLB free-agency tiers: Which stars are going to get paid this winter?
28dJeff Passan
MLB Power Rankings: Where all 30 teams stand as playoff picture comes into focus
34dESPN.com
Prospects who have taken the biggest step forward in 2021 for all 30 MLB teams
36dKiley McDaniel
Mar 19, 2014 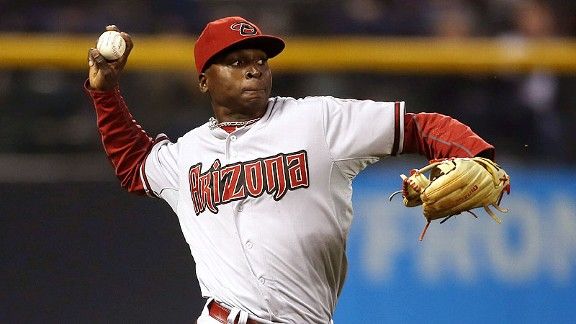 Didi Gregorius may be traded by the D-backs for an MLB-ready starting pitcher.PORT ST. LUCIE, Fla. -- The Arizona Diamondbacks are making Didi Gregorius, not fellow shortstop Chris Owings, available in trade discussions with other teams, an industry source told ESPNNewYork.com.

The D-backs seek an MLB-ready starting pitcher in return, hoping to offset the loss of intended Opening Day starter Patrick Corbin with a UCL tear.

A trio of Arizona scouts, including special assistant Todd Greene, watched a Mets intrasquad game involving Double-A and Triple-A players Tuesday on a back field at the Port St. Lucie complex. Noah Syndergaard, Logan Verrett and Jacob deGrom, who all may be in Triple-A Las Vegas' rotation to open the season, pitched in that game. Syndergaard almost certainly is off-limits in Mets discussions.

Gregorius, 24, hit .252 with seven homers and 28 RBIs and had a .332 on-base percentage in 404 plate appearances with the D-backs last season. He was acquired by Arizona from the Reds on Dec. 11, 2012 in a three-team trade that also landed Shin-Soo Choo in Cincinnati.

The scouting report on the ESPN Fantasy Projection reads:

A defensive whiz, Gregorius is unfortunately not much with the stick. Sure, he batted .322 in his first 38 games for the Arizona Diamondbacks, but from that point forward, he hit .202/.294/.284 in 65 contests, unable to do much with anything other than pitches left over the middle of the plate. His defense might be valuable enough to the Diamondbacks that he'll earn the starting shortstop job this spring, and he's knowledgeable enough of the strike zone -- he had a 9.2 percent walk rate in 2013.