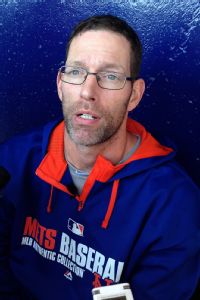 Kyle Farnsworth appears unlikely to remain with the Mets beyond the next few days.

JUPITER, Fla. -- The Mets hoped to find values with the signings of Jose Valverde and Kyle Farnsworth on minor-league deals. Now, only Valverde appears slated to make it to Opening Day.

Farnsworth, 37, has a contract out on Sunday and is not projected to make the roster. Even if Farnsworth did not exercise his option to depart, it appears unlikely the Mets would offer him a $100,000 retention bonus. That payment would be required to be paid five days before the season to get Farnsworth to go to the minors.

The bottom line: Farnsworth has appeared in the majors for 15 seasons, but it may be a struggle to latch on anywhere to open the year, at least at the major league level.