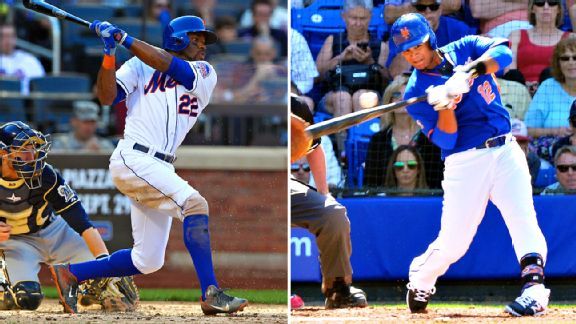 “Well, we certainly didn’t get all the answers we wanted -- that’s not a secret -- due to the injuries and some of the other issues,” Collins said Thursday afternoon, less than an hour before the Mets broke camp. “But we’ll make the decisions based on what we’ve seen and what we think are our best options.”

In fact, Collins insisted he still does not know what his Opening Day lineup will be.

He did pledge that Eric Young Jr. and Juan Lagares both would find their ways into the lineup, although he could not define particularly how.

Young went 3-for-4 in Thursday’s Grapefruit League finale, upping his average to .298 with a .377 on-base percentage. Lagares had a dazzling diving catch in right-center to deprive Jose Lobaton of an eighth-inning extra-base hit.

“Certainly we’ve got to figure out how to get those guys in the lineup on a somewhat regular basis, for sure,” Collins said. “Eric, what you saw today is exactly what he can bring to a team, and that’s he gets on. [Jordan] Zimmermann is a little different than the normal guy -- great move, good quickness to the plate, a tough guy to run on. But when Eric Young gets on, things can happen.

“And with what you saw from Juan today, the way he played defense in the outfield -- not just the great catch he made -- but in the last inning, even though the run ended up scoring, they didn’t score on the base hit to center. So he’s got that ability to cut that part of the game down.

“We’ve made some commitments and we’re going to stick by them and we’ll just see how they play out. One hundred sixty-two is a long year. A long year. As we know, what starts in April doesn’t always finish that way.”

Collins would not clarify what he meant by “commitments.” One interpretation might be the public proclamation that Chris Young would be an everyday player, even though he has a career .225 average against right-handed pitching. Conceivably, over time, EY Jr. and Lagares both can start alongside Curtis Granderson sometimes with Chris Young on the bench.

Still, the manager acknowledged about CY, EY Jr., Lagares and Granderson: “Those four guys will get the majority of playing time out of the gate for sure.”