Jayce Boyd hit a combined .330 with nine homers and 83 RBIs in 458 at-bats last season between Savannah and St. Lucie.

After June 28, however, the righty-hitting/righty-throwing Boyd was limited to DH because of thoracic outlet syndrome. That compression in the shoulder led to tingling as he released the baseball -- “like hitting your funny bone on something” -- and compromised throwing.

Boyd, 23, had early symptoms dating back to his college days at Florida State. He had the issue surgically repaired in late September by doctor Robert Thompson in St. Louis and resumed playing first base on Opening Day this month for Double-A Binghamton. 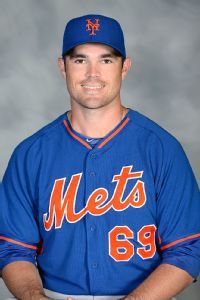 Thompson is the same doctor who surgically repaired Dillon Gee’s throwing shoulder in 2012 after the near-complete blockage of an artery led to numbness in his arm.

“I came into [last] season prepared and ready to go,” said Boyd, a sixth-round pick in 2012. “It obviously takes a toll on anyone just playing pretty much every day. It got fixed, and I’m excited to move on.”

Boyd’s .330 average ranked first in the organization last season, while his 83 RBIs trailed only Dustin Lawley (96) and Wilmer Flores (86).

“Last year was great, getting to learn what I am as a hitter and refining my approach, how to translate it from college into the professional atmosphere,” Boyd said. “… I did widen my stance a little bit and just tried to refine my zone as far as pitches I wanted to hit and drive. Working counts and getting into good hitting counts is obviously the goal of hitting. Last year, I got much better at laying off the marginal pitches, whether it was fastballs or offspeed -- the marginal ones I knew I could put in play, but I just couldn’t put in play hard. I think that’s what I’ve gotten better at -- swinging at better pitches that I know I can drive.”

As for his power potential, Boyd added: “My approach has never really been to hit home runs. My approach isn’t to get in the box and try to hit the ball out of the ballpark. My philosophy is to hit the ball gap to gap and be more, I guess, a doubles guy than a home-run guy. But I think those translate into home runs eventually as you get stronger and progress as a hitter.”

After starting at first base on Opening Day for the B-Mets, Boyd served as designated hitter the next two games. That was not about easing him back after the shoulder injury, Boyd suggested. Instead, it was about ensuring playing time for teammates. Matt Clark, who slugged 25 homers in Japan last season, started Game Nos. 2 and 3 at first base. Boyd returned to first base Tuesday, with Clark DHing.

“I think we just have a lot of guys in our lineup who are pretty much everyday guys,” Boyd said. “So everyone is getting in the rotation and getting their chance to play.”

As for his 2014 goals, Boyd said: “I’m just refining my approach still, growing as a player. And getting back into playing first base. It’s been a while since I played first every day and felt comfortable over there. It’s an exciting feeling to get out there and to be able to play comfortably and not have to worry about anything anymore -- any symptoms coming back.”

• After Eric Campbell started three straight games at first base to open the season with Las Vegas facing southpaws, Campbell shifted to second base the next two games against right-handers. That allowed Wally Backman to start Allan Dykstra at first base. Team officials say that it more about trying to get both bats into the lineup than a burning desire to see Campbell at second base. Campbell, who nonetheless should benefit from the increased versatility, last played second base in 2008 with Brooklyn, in his first professional season.

• Mets doctors have diagnosed Cory Mazzoni with a lat strain, a team official said. The preliminary diagnosis had involved the triceps. Mazzoni apparently is now not particularly close to joining the Triple-A Las Vegas rotation, but Mets officials are relieved it is neither a shoulder nor elbow injury that might raise alarm. Mazzoni was forced to pull himself from the Grapefruit League finale as the Mets were breaking camp two weeks ago.

• Zach Lutz is off to a strong start at the plate with Vegas. Not only is the third baseman hitting an organization-best .500, he also has a .679 on-base percentage through six games with the 51s.

• 2011 first-round pick Brandon Nimmo, who was hindered by a hand issue last season, is hitting .313 with a .450 on-base percentage with St. Lucie. He has reached base in all five games.

• Bobby Abreu is 6-for-his-first-12 with Vegas while serving as a DH and pinch hitter.

• What does Daisuke Matsuzaka make of his time in Triple-A? “I believe I’m getting an opportunity sooner or later and have to make sure I’m prepared when the time comes,” he told the Las Vegas Review-Journal through an interpreter after allowing three runs in five innings Monday.

Said Backman to the newspaper: “He’s insurance for the major-league club. He didn’t really deserve to be sent down, but nobody else did, either, and he was on a minor-league deal. It’s kind of unfortunate for him, but fortunate for us in Las Vegas. I don’t know if his time will be very long here, especially if he pitches like he did in spring training.”

• Bronx native T.J. Rivera had a grand slam and finished with five RBIs on Opening Day for St. Lucie. He produced two homers all of last season with the Florida State League club -- including one inside-the-parker.

• Savannah-born John Gant had a big debut in his hometown, allowing only one run in six innings Friday. Gant attended games as a youth at Historic Grayson Stadium and had plenty of family on hand for the homecoming.

• The Gnats hit only 12 home runs last season at spacious Historic Grayson Stadium. This year, they homered in each of the first four games there -- Patrick Biondi on Thursday, Gavin Cecchini on Friday, Victor Cruzado on Saturday and Stefan Sabol in Game 1 of Tuesday’s doubleheader.

• Vic Black is on the DL with Vegas with a pinched nerve in his neck.