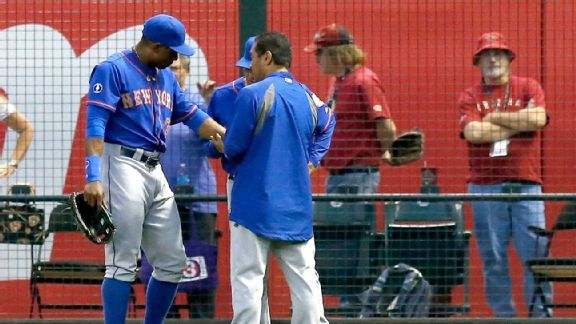 Trainer Ray Ramirez and Terry Collins check out Curtis Granderson's left arm after a collision with the outfield wall in the first inning Monday.PHOENIX

FIRST PITCH: For the sixth time this young season, the Mets (6-7) will attempt to move back to .500 on Tuesday night.

• The Mets suffered a pair of injuries to outfielders Monday. Juan Lagares pulled his right hamstring and Curtis Granderson suffered bruises to his left forearm, rib cage and knee. Lagares appears likely to land on the disabled list, with Kirk Nieuwenhuis expected to join the Mets from Triple-A Las Vegas. Granderson officially is day-to-day, but may not see any action until the weekend at Citi Field at the earliest.

Lucas Duda was forced to play in the outfield for the first time since last June.

Chris Young, who has now reached base in nine of 10 plate appearances during his rehab assignment with Las Vegas, is not eligible to be activated from the DL until Friday.

• Zack Wheeler reverted to an old delivery, limited the D-backs to two runs in 6 1/3 innings and earned his first win since last Aug. 31 as the Mets beat Arizona, 7-3, Monday at Chase Field. Carlos Torres handled the final 2 2/3 innings to earn his first big-league save. Duda finished 4-for-5 with two RBIs. Read more in Newsday and at MLB.com.

• Matt Harvey spent Sunday watching the Knicks game alongside a model, but was allowed because it was not a scheduled rehab day in Port St. Lucie, Fla., according to a team official. Read more in the Post.

• Ex-Met Frank Francisco has signed with the Chicago White Sox and was assigned to Triple-A Charlotte.

• Ike Davis discusses his pinch-hitting role with Matt Ehalt in the Record.

• Oliver Perez discusses his reinvention as a successful reliever in the Journal. “That’s really hard for anybody, when you get fired from your work,” Perez told the newspaper about getting released by the Mets in 2011, during the same spring training that Luis Castillo also was cut loose.

• Chris Schwinden, released by the Mets during spring training, has signed with the independent Lancaster (Pa.) Barnstormers.

• From the bloggers … Mets Police offers some thoughts on the Mets brand. … The Eddie Kranepool Society suggests it may be time for Terry Collins to shake up the lineup by dropping Daniel Murphy to No. 7 and letting Travis d'Arnaud bat second. … NY Mets Life offers it take on the Mets season thus far.

YOU’RE UP: Do you approve of Kirk Nieuwenhuis’ expected promotion to replace Juan Lagares?