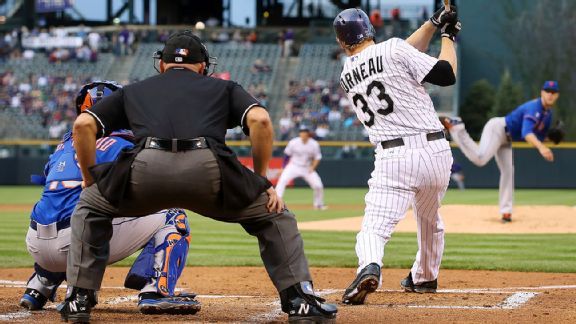 • Zack Wheeler had his shortest big-league outing and surrendered a career-high seven runs as Colorado beat the Mets, 10-3, Friday. Curtis Granderson had a two-hit game, including his second long ball as a Met, which snapped a 75 at-bat homerless drought. Read game recaps in the Post, Daily News, Times, Star-Ledger, Record, Newsday and at MLB.com.

• Commissioner Bud Selig reiterated he has “a lot of faith” in the Wilpons and the Mets. He praised the organization’s farm system. Read more in the Star-Ledger, Record and Journal.

• Joel Hanrahan, whom the Mets recently watched throw, signed with Detroit. He receives a $1 million base salary with the chance for $2 million more in incentives.

• Terry Collins met with his outfielders on Thursday and suggested there would be a rotation among the four primary guys. Still, Eric Young Jr. has sat consecutive games since Juan Lagares returned from the disabled list. Read more in the Journal, Star-Ledger and Newsday.

• Jacob deGrom and/or Rafael Montero may start getting exposed to the bullpen with Triple-A Las Vegas soon.

• MLB will try to reduce the number of games in which a team plays a night game on one coast, then has to travel across the country for a game the next day.

• Read more on Granderson in the Star-Ledger.

• Mookie Wlison has a Q&A with Charles Curtis in the Star-Ledger. One exchange:

Were you surprised at the reaction last week with the quote about feeling like you were a hood ornament for the Mets?

Wilson: “I knew it would raise a few eyebrows. I just didn't know to what extent. I guess people think it's a little out of character. I'm not surprised, no.”

• Justin Felisko in the Times chats with Travis d’Arnaud.

• Ex-Met Collin McHugh is 2-0 with a 0.59 ERA for the Houston Astros. Mark Simon recaps his success here.

BIRTHDAYS: Chris Cannizzaro, a catcher for the Mets during their first four years in existence, was born on this date in 1938.

@AdamRubinESPN So they finally acknowledge players from their past & it's for a database expansion campaign. Woulda preferred Oldtimers Day.

YOU’RE UP: Are you concerned about Zack Wheeler?