Rapid Reaction: Marlins 4, Mets 3
7yAdam Rubin
Carrasco has bone fragment removed from elbow
6d
A fans guide to abiding the LOL Mets
21dDevin Gordon
Jeff Passan answers 20 burning questions about the MLB playoffs
21dJeff Passan
What's next for the New York Mets after Luis Rojas' departure
22dBradford Doolittle and David Schoenfield
Mets move on from Rojas after 3rd-place finish
22d
Mets likely to make Rojas decision before others
27d
MLB Power Rankings: Where all 30 teams stand in the final week
27dESPN.com
Mets give Syndergaard start, shut deGrom down
28d
Your squad isn't going to the MLB playoffs? The No. 1 offseason question for each eliminated team
23dBradford Doolittle
Passan's early MLB free-agency tiers: Which stars are going to get paid this winter?
28dJeff Passan
MLB Power Rankings: Where all 30 teams stand as playoff picture comes into focus
34dESPN.com
Prospects who have taken the biggest step forward in 2021 for all 30 MLB teams
36dKiley McDaniel
May 5, 2014

After seven scoreless innings from the southpaw, Omar Quintanilla committed a critical error and Daisuke Matsuzaka failed to protect a three-run lead in the eighth, handing Niese a cruel no-decision.

The New York Mets ultimately lost 4-3 on Casey McGehee’s walk-off RBI single in the ninth against Gonzalez Germen. The ball ricocheted off Germen's leg and rolled through the vacated second-base position and into right field. Germen had inherited a runner at first base from Scott Rice with none out.

The Marlins improved to 15-5 at home. Last April, the Mets twice lost games at Marlins Park in which they held ninth-inning leads. 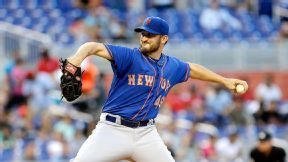 No-Dice: Matsuzaka took over in the eighth with a 3-0 lead after a 108-pitch effort by Niese. The lead disappeared in a flash.

Pitching for the first time since suffering a right calf injury Saturday in Denver, Matsuzaka walked consecutive batters to open his appearance. Giancarlo Stanton then sent a rifle through the middle for an RBI single. McGehee sent a routine liner through Quintanilla’s legs at shortstop for a run-scoring E-6. And Jarrod Saltalamacchia produced a game-tying RBI double.

That ended Matsuzaka’s outing without an out being recorded.

Only Kyle Farnsworth’s tightrope walk allowed the Mets to escape the eighth with the score still tied at 3-3.

Farnsworth inherited two runners in scoring position with none out. He eventually retired Marcell Ozuna on a full-count groundout to third base with the bases loaded to send the game to the ninth inning still even.

Niesely done: The Mets have received back-to-back scoreless gems from their starting pitchers against high-octane offenses.

Niese has now allowed only three earned runs in 26 2/3 innings in his past four starts. He slashed his season ERA to 1.82 by limiting the Marlins to five hits and one walk in seven scoreless frames.

The lefty settled down nicely after requiring 41 pitches to navigate the first two innings.

Niese faced one final predicament in the seventh, after Jeff Baker and Reed Johnson opened the inning with singles. Niese escaped with the 3-0 lead when Adeiny Hechavarria lined out to center field and the pinch-hitting Ozuna grounded into a double play on Niese’s 108th and final pitch.

For starters: Daniel Murphy and Curtis Granderson both jumped on first-inning fastballs from Marlins starter Nate Eovaldi to stake the Mets to a 2-0 lead before Niese even took the mound.

Murphy homered for the first time since Sept. 24, against Cincinnati’s Mike Leake.

Granderson went deep for the third time as a Met. He has a six-game hitting streak during which he is hitting .391 (9-for-23).

Eovaldi had surrendered only one homer in 38 1/3 innings this season entering the start.

Bobby Abreu, starting for only the second time as a Met, added a fourth-inning sacrifice fly that plated David Wright as the Mets opened a 3-0 lead.

Juan Lagares entered for defense in the bottom of the seventh with the Mets maintaining that three-run lead. Granderson shifted to right field and Abreu departed.