FIRST PITCH: The Mets have lost a season-high five straight as well as eight of nine. They also now occupy sole possession of last place in the National League East.

Can Jonathon Niese stop the slide?

Hamels has a 7-14 record and 4.65 ERA in 27 career starts against the Mets. The Mets roughed him up for six runs in 4 2/3 innings two weeks ago in Philly. Hamels then allowed five runs on 10 hits and a walk against the Toronto Blue Jays, including surrendering homers to Edwin Encarnacion and Colby Rasmus. Overall, Hamels needs one win for 100 in his career.

• Terry Collins would not commit Saturday to Jenrry Mejia making his next start, and appears to prefer 23-year-old Rafael Montero getting promoted from Triple-A Las Vegas for Wednesday’s outing opposite Masahiro Tanaka and the Yankees at Citi Field. Of course, Sandy Alderson -- who picked Mejia over Daisuke Matsuzaka out of spring training, which was not Collins’ preference -- would need to sign off on bouncing Mejia from the rotation. Would the GM allow a prospect to debut in the Subway Series (and before the Super 2 deadline)? That seems out of character. In fact, a source tells columnist John Harper in the Daily News about Alderson's thinking on Montero: "not yet." 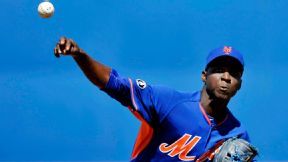 Mejia reiterated he is leery of bullpen work because he believes it contributed to his Tommy John surgery. “I worry about my arm,” Mejia told reporters. “I want to have a long career. … I don’t want to get hurt again.”

After tossing 5 1/3 no-hit innings Friday (with three walks) at Salt Lake, Montero is 4-1 with a 3.67 ERA and .203 opponent batting average in eight Pacific Coast League starts.

Read more in the Post, Newsday and at MLB.com.

• Eric Campbell joined the Mets on Saturday and received No. 29, formerly donned by Ike Davis. He delivered a tiebreaking sac fly while pinch hitting with the bases loaded and one out in the sixth against left-hander Jake Diekman. Campbell became the first player in franchise history with a sac fly in his first big-league plate appearance. Ken Boswell in 1967 had a sac fly in his MLB debut, but it came later in the game.

Campbell had an eventful second plate appearance. With the score tied at 4, one out and two in scoring position in the eighth, Mike Adams threw the first pitch of an intentional walk. Chase Utley then came to the mound with Carlos Ruiz and the Phillies -- realizing Bobby Abreu had grabbed a helmet and planned to subsequently pinch hit -- reversed course and pitched to Campbell, who proceeded to strike out. 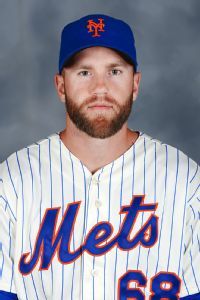 Eric Campbell made his major league debut Saturday with a sacrifice fly and strikeout off the bench.

Campbell initially was in Saturday’s starting lineup as the first baseman, but Lucas Duda said he had recovered enough from a suspected case of food poisoning and was a late addition to the lineup in Campbell’s place.

Josh Satin, who had been 3-for-28 this season in sporadic use, was optioned to Las Vegas. Campbell figures to start Sunday against Hamels.

• A half-inning after the Mets stranded the bases loaded, Ryan Howard delivered a two-out RBI single in the ninth against Kyle Farnsworth and Philadelphia beat the Mets, 5-4, Saturday night at Citi Field. At three games under .500, the Mets (16-19) have matched their 0-3 start for their season low-water mark.

After consecutive singles to open the bottom of the eighth, Chris Young -- hitless in 14 at-bats -- had a successful sac bunt. Campbell then struck out, Wilmer Flores walked and Abreu, pinch-hitting for Travis d’Arnaud, grounded back to Adams as the score remained tied at 4.

Scott Rice had inherited a one-run lead for the seventh from Dillon Gee and surrendered a game-tying RBI double to Utley.

Gee’s scoreless streak ended at 16 innings with two runs by the Phillies in the first. He allowed three runs in six innings and tossed only 81 pitches before departing with a 4-3 lead in what became a no-decision. Collins preferred having Rice face the Utley/Howard portion of the Phillies lineup in their fourth plate appearances.

David Wright snapped a career-high 136 at-bat homerless drought with a two-run homer in the first inning against Kyle Kendrick. Wright finished 3-for-5 with three RBIs, but popped out in foul territory against Jonathan Papelbon with Daniel Murphy at second base to end the game.

Mets pitchers remained hitless and are now 0-for-61 to open the season.

• Jon Hamm, who plays advertising executive Don Draper on “Mad Men,” is a St. Louis Cardinals fan in real life. Hamm was in New York on Friday promoting his role as a sports agent in the new Disney movie, “Million Dollar Arm.” Writes Anthony McCarron in the Daily News: 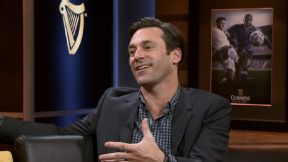 He’s from St. Louis and grew up loving the Cardinals and Ozzie Smith and is still close to Ted Simmons’ son, a childhood friend. The ‘82 World Series is his favorite baseball memory.

“Oh, I hated the Mets with a passion that kills and still do,” Hamm said last week while promoting his new movie, “Million Dollar Arm,” which opens Friday, May 16.

But, Hamm acknowledges, the Mets -- at least the late ’60s version -- are the “perfect team for Don Draper to root for. They’re brand new. They represent nothing but possibility.

“Don would never be a Yankee fan. That’s a frontrunner. He’s an underdog guy, if he’s anything.”

Speaking of Don Draper and the ’69 Mets, columnist Mike Vaccaro addresses that topic in the Post.

Read more in the Times and Newsday.

• Kevin Burkhardt (Class of 1997) will give William Patterson University’s commencement address Wednesday at the Izod Center, writes Phil Mushnick in the Post.

• The Yankees will honor Joe Torre, Goose Gossage, Tino Martinez and Paul O’Neill with plaques in Monument Park this season. So what about the Mets honoring their past heroes? Writes David Lennon in Newsday:

The franchise has retired only three numbers in addition to Jackie Robinson's No. 42 -- Casey Stengel's 37, Gil Hodges' 14 and Tom Seaver's 41 -- but [Mike] Piazza seems to be next in line.

Piazza's No. 31 has not been issued by the Mets since he left after the 2005 season, and he was inducted into the team's Hall of Fame last year. But the Mets appear to be waiting on Piazza's campaign for Cooperstown, and he fell 74 votes shy of the 75 percent needed (429) for induction in his second year.

Carter's No. 8, Keith Hernandez's No. 17 and Willie Mays' No. 24 also have been mostly kept out of circulation, so they remain possibilities.

In the meantime, the Mets rely on a seven-person committee to decide on their own Hall of Fame, which has 27 inductees. Who will follow Piazza? David Wright? That would be a bit of a wait.

• Columnist Ken Davidoff in the Post suggests the Mets' season appears snowballing out of control.

• Omar Quintanilla cleared waivers and accepted a demotion to Vegas. Quintanilla, who was replaced by Wilmer Flores on Friday, had the right to decline the assignment and declare free agency.

• There have been 122 players to play for both the Mets and Yankees, writes Anthony Rieber in Newsday. There are five slated to participate in this week’s Subway Series: Abreu, Bartolo Colon, Farnsworth, Curtis Granderson and Carlos Beltran.

• The Los Angeles Angels released ex-Mets left-handed reliever Robert Carson from Triple-A Salt Lake, where he had a 10.34 ERA and had allowed 23 hits and 13 walks in 15 2/3 innings.

• From the bloggers ... Faith and Fear encounters a Mets fan existential crisis.

BIRTHDAYS: Walt Terrell, who was traded to the Detroit Tigers for Howard Johnson on Dec. 7, 1984, turns 56.

My child is already sick of this pen pic.twitter.com/RAClnsgq25

With each passing loss that Loyalty Oath is becoming a Loyalty Dare. #Mets