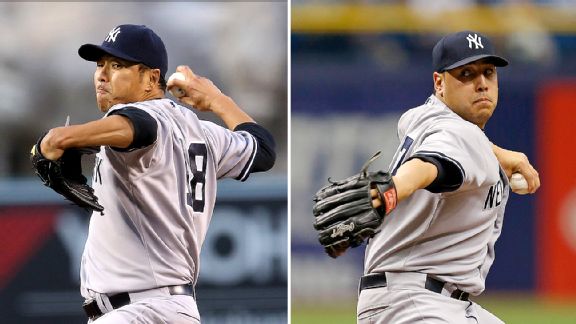 The Mets are due to face Hiroki Kuroda and Vidal Nuno in the Bronx.NEW YORK

FIRST PITCH: Bring on the Yankees! (And the outrage over what gift the Mets will give retiring Derek Jeter!)

After halting their five-game losing streak with a dramatic win Sunday against the Philadelphia Phillies, the “True New Yorker”-cheered Mets face their Bronx rivals for the next four games.

First up are two games at Yankee Stadium. Then the site shifts to Citi Field.

The Mets swept the four games from the Yankees in 2013, but are 40-53 against the Bombers lifetime in the regular season.

• Down three runs in the bottom of the ninth, the Mets ultimately rallied for a 5-4 win against the Phillies on Sunday at Citi Field. Ruben Tejada delivered a walk-off RBI single in the 11th with the bases loaded. Wilmer Flores had been unavailable Sunday because he and Gonzalez Germen were suffering from an illness that is making its way through the clubhouse. Eric Campbell notched his first major-league hit, in the fourth inning against Cole Hamels.

“The energy level is unbelievable,” Terry Collins said postgame Sunday about the clubhouse atmosphere. “It hasn’t been that high in a long time, even when we were playing good. They knew things hadn’t been going good. We got big hits from some guys who have been struggling. That’s all going to add up in the end. This win may really be the win that gets us going.”

Said Jonathon Niese, who received a no-decision: “Obviously that was much-needed. … I was saying it during the game: This is going to be the game that turns this thing around. Hopefully that’s the case and we can just build off of this one.”

• Collins said Jeurys Familia is “real close” to taking over the closer’s role. Read more in the Daily News.

• Sandy Alderson refused to speak to the media Sunday about Jenrry Mejia’s status for Wednesday’s start or any other topic. Read more in the Star-Ledger and Newsday.

• Jeter, entering his final Subway Series, is nostalgic, writes George King in the Post. Read more in the Daily News.

• CC Sabathia, who had been due to face the Mets on Thursday, instead landed on the disabled list. Alfredo Aceves is expected to make the start in Sabathia’s place.

• Kevin Plawecki threw out three would-be base stealers and Tyler Pill won for the first time in more than a year as Binghamton beat Harrisburg, 2-1. Read the full minor-league recap here.

• Mets pitchers are 0-for-63 at the plate this season. Jay Schreiber in the Times suggests they channel their inner Dae-Sung Koo during the Subway Series. Koo doubled against Randy Johnson and scored -- with a weighted ball in his jacket pocket -- at Shea Stadium on May 21, 2005.

• Daniel Barbarisi in the Journal previews the Subway Series.

• From the bloggers … Blogging Mets thinks the fact that Mets pitchers have not yet gotten a hit is a non-story. … NY Mets Life examines if Terry Collins is the right man for the job.

Good for Ruben Tejada. He was crestfallen Wednesday in Miami when he was told he'd be benched. Everyone deserves a moment. #Mets

YOU’RE UP: Who will win the Subway Series?