Analysis: The problem isn't the manager
7yAdam Rubin
Carrasco has bone fragment removed from elbow
7d
A fans guide to abiding the LOL Mets
22dDevin Gordon
Jeff Passan answers 20 burning questions about the MLB playoffs
22dJeff Passan
What's next for the New York Mets after Luis Rojas' departure
23dBradford Doolittle and David Schoenfield
Mets move on from Rojas after 3rd-place finish
23d
Mets likely to make Rojas decision before others
28d
MLB Power Rankings: Where all 30 teams stand in the final week
28dESPN.com
Mets give Syndergaard start, shut deGrom down
29d
Your squad isn't going to the MLB playoffs? The No. 1 offseason question for each eliminated team
24dBradford Doolittle
Passan's early MLB free-agency tiers: Which stars are going to get paid this winter?
29dJeff Passan
MLB Power Rankings: Where all 30 teams stand as playoff picture comes into focus
35dESPN.com
Prospects who have taken the biggest step forward in 2021 for all 30 MLB teams
37dKiley McDaniel
May 12, 2014

NEW YORK -- Terry Collins got beat up on Twitter this weekend for in-game maneuvering that included Chris Young sacrifice bunting, Dillon Gee departing at 81 pitches and, well, just about everything else. Even his job security began to be questioned.

The bottom line, though: Jabs at Collins, who has somehow kept his teams afloat and playing hard despite inferior talent, are misdirected.

That criticism instead ought to be directed at general manager Sandy Alderson.

Alderson is now in his fourth season as Mets GM. And he appears headed for his fourth straight losing season, although Sunday’s 5-4, 11-inning, comeback win against the Philadelphia Phillies demonstrated the Mets (17-19) continue to have fight in them.

This regime has been peddling the future for four years now. And at some point they might actually deliver. If Noah Syndergaard emerges as a frontline starter, Zack Wheeler truly blossoms and Matt Harvey returns clicking on all cylinders next season, that triumvirate might lead the Mets to legitimate contention in 2016, 2017 and beyond. 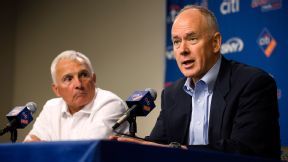 Sandy Alderson may be headed for his fourth straight losing season as Mets GM. He arguably deserves the criticism more than Terry Collins.

Of course, that presumes the Mets can find some bats. And it also presumes other teams aren’t better at building through young talent than the Mets. The Miami Marlins have the pitching too, headlined by Jose Fernandez, and they have the young outfield bats the Mets lack -- including Giancarlo Stanton, Marcell Ozuna and Christian Yelich. Perhaps the Mets can swing a trade for a bat using excess pitching, but it is not here now.

If, when Alderson interviewed with the Wilpons after Omar Minaya was ousted at the end of the 2010 season, Alderson had promised his first winning season would come six years down the road, do you think he would have been hired?

There ought to have been more competitiveness, at least by now, while fans await the future faces of the organization. And that requires better identification of talent by the front office.

Look, there is no indication Alderson is in any danger of losing his job. Yes, he is in the final season of his original four-year deal, which is estimated to annually pay him $2.5 million. And, yes, his team option for 2015 has not yet been picked up -- at least not picked up and publicly acknowledged.

Still, the Wilpons have gone so far down the road with Alderson that even if the timeline to win is a lot longer than they expected, it is likely they ride it out to see where it leads rather than bail now and start with a new GM and new plan that could elongate the process.

The painfully slow rebuilding, which eats at the fans, has to gnaw at the Wilpons, too, because their financial lifeblood is derived from revenue from attendance. I’ve covered this team for a dozen seasons as the beat writer, and I have never seen this level of combined anger, distrust, frustration and dismay directed collectively at the organization by its fans. By now, even if the Mets weren’t challenging the Washington Nationals and Atlanta Braves for the division, there ought to have been positive energy in the ballpark, like there was in 2005 with the “New Mets” -- a palpable feeling something bigger was looming.

There are no Pedro Martinez and Carlos Beltran now because the Mets do not throw around those types of dollars anymore. And the frustration is partly a function of the payroll that undoubtedly has constrained Alderson. Yet the frustration also is a result of an I’m-smarter-than-you smugness that fans perceive is coming from the front office, and which seems so out of place given its actual accomplishments beyond auctioning off Beltran and R.A. Dickey.

Forget about the Mets’ hitting approach, which you can tell by Keith Hernandez’s repeated, audible, on-air sighs is not exactly the route the ’86 Mets took to the organization’s last championship. Alderson’s “Moneyball” pedigree was supposed to mean the organization could identify low-cost players to keep the team competitive in the years until the farm system really started spitting out players.

Instead, with rare exceptions such as LaTroy Hawkins, there have been swings and misses and more swings and misses, particularly in the bullpen. To name a few: D.J. Carrasco, Frank Francisco, Ramon Ramirez (in a trade for Angel Pagan), Scott Atchison, Brandon Lyon and now Jose Valverde.

The Mets valued Kyle Farnsworth so little at the end of spring training that they released him rather than pay $100,000 to send him to the minors. How he became the closer speaks to the negligence in failing to have an adequate backup plan for Bobby Parnell.

Parnell was no guarantee to be OK as he returned from surgery to repair a herniated disk in his neck that cost him the final two months of last season. And there was no apparent safety net in place, with the exception of a misguided hope that Valverde would be better than he was last season, when he was released from Triple-A by the Detroit Tigers.

The Mets seem to always need to win the trade, or there is inaction. Did they really need to still evaluate Ike Davis versus Lucas Duda in spring training after seeing them for the three previous years? When the Mets indicated they were not pursuing Jose Abreu during the offseason because they already had three first basemen, how can you have full faith in their evaluation skills? Wasn’t it entirely predictable how Ruben Tejada would work out at shortstop?

So the Mets enter the Subway Series at 17-19, still undoubtedly trying to sell to "True New Yorkers" that 90 wins is possible and that they ought to come to the ballpark and support the team.

There may come a day in the next few seasons that the Mets realize that 90-win goal. And then people might praise Alderson for leaving the organization in such good shape. But if the price was, say, six losing seasons under his watch first -- plus the two from Minaya that preceded it -- was that really great front-office work? Or if you fail enough seasons, is it simply inevitable that at some point you’ll accrue enough young talent to be competitive again?