Lucas Duda delivered a broken-bat, run-scoring single that plated Eric Campbell and evened the score, and Chris Young followed with a two-run homer later in the eighth inning as the New York Mets beat the New York Yankees 9-7 before an announced crowd of 46,517 in the Bronx.

The Mets (18-19) slugged a season-high four home runs -- by Travis d’Arnaud, Curtis Granderson, Eric Young Jr. and C.Y. They won for only the third time in their past 11 games.

Kyle Farnsworth got into a one-out jam in the ninth with runners on the corners, but Brian McCann grounded into a game-ending double play, initiated by a diving stop by Duda and turned at second base by David Wright because of the overshift.

Penned: Jenrry Mejia, reassigned to the bullpen before the game, made his 2014 relief debut and earned the win. 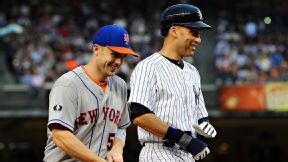 Derek Jeter and David Wright share a yuk at the end of the first inning.

Mejia inherited a runner on second with two outs in the seventh inning and the Mets trailing 7-6. He struck out Alfonso Soriano on three pitches.

Then, staked to a 9-7 lead after the Mets’ three-run eighth, Mejia allowed a leadoff single to Yangervis Solarte. Kelly Johnson followed by grounding into a double play. Brian Roberts singled, but Mejia rallied by striking out Brett Gardner.

Not his day: Bartolo Colon surrendered a second-inning grand slam to Gardner and eventually was charged with seven runs (six earned) in 5 2/3 innings in a no-decision. In his eight starts, Colon has allowed seven or more runs three times. His ERA has ballooned to 5.84.

A half-inning after Granderson slugged a game-tying two-run homer, the Yankees scored three runs in the bottom of the sixth to take a 7-4 lead. The final run charged to Colon scored when d’Arnaud threw to second base on Gardner’s steal attempt. The throw went into center field, allowing Roberts to trot home with an unearned run.

True New Yorker: Granderson received a tame mixture of boos and cheers in his return to Yankee Stadium as a visitor -- although it’s hard to tell which set of fans was offering which reaction.

The friendly confines of Yankee Stadium proved a welcome sight. Granderson launched a two-run homer in the sixth against Hiroki Kuroda that evened the score at 4.

During a pregame interview, Granderson said his “True New Yorker” statement -- made when he was introduced during the winter meetings -- was not something cooked up by marketing people to launch a campaign the Mets eventually would adopt during the 2014 season.

“It was something that I heard from people around the city,” Granderson said. “It was me repeating what I had heard, what people said.”

Granderson’s original December quote: “A lot of the people I’ve met in New York have always said that true New Yorkers are Mets fans. So I’m excited to get a chance to see them all out there.”

The Mets recently sent an email blast to fans touting that slogan with a request for them to sign a loyalty oath.

Sparkplug: E.Y. Jr., who essentially had been benched once Juan Lagares returned from the disabled list on May 1, has made the most of back-to-back starts. He has produced consecutive three-hit games and scored twice and drove in two runs Monday.

E.Y. Jr. pulled the Mets within 7-6 with a two-run homer in the seventh against Alfredo Aceves, who had been speculated as the Thursday starter in place of CC Sabathia. Right-hander Chase Whitley could make his MLB debut in Thursday’s Subway Series finale instead of Aceves.

With the Mets facing a left-hander Tuesday and the designated hitter in use, Terry Collins likely will be able to use all four of his primary outfielders, including E.Y. Jr., in the starting lineup.