NEW YORK -- Hours after Jacob deGrom was scratched from his Triple-A start, he received a promotion to the majors.

The Mets placed Gonzalez Germen on the disabled list with a virus after Monday's 9-7 win against the Yankees and summoned deGrom from Vegas for a relief role.

The club will need to make another roster move Wednesday, when Rafael Montero is officially activated for the start. Jose Valverde would appear vulnerable.

All 58 of deGrom's career minor league appearances have been as a starting pitcher, although he did work in relief late in his college career at Stetson, after converting from shortstop. He also got brief exposure late in big-league camp during spring training. 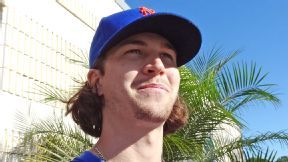 Jacob deGrom is headed to the majors.

DeGrom, 25, is 4-0 with a 2.58 ERA in seven Triple-A starts this season. His fastball typically sits at 91-94 mph. The sinker is complemented by a slider and a changeup.

He arrived in spring training last year with a broken ring finger on his glove hand, the result of being kicked by a calf while working at a neighbor’s cattle ranch before reporting. He eventually rose all the way from Class A St. Lucie, to Double-A Binghamton and then to Triple-A Las Vegas during the course of 2013. And while he was bypassed for a September call-up, deGrom was added to the 40-man roster after the season, resulting in an automatic invite to this year’s camp.

DeGrom underwent Tommy John surgery on Oct. 10, 2010, shortly after signing with the Mets, and missed the entire next season.

“Just coming back from Tommy John, that was a successful 2012,” deGrom said during spring training. “And then when I started in St. Lucie [in 2013], I thought I’d probably end up in Binghamton to end the year. And then I got the chance to pitch in Vegas and pitched pretty well in the beginning. That helped me stay. And I was thankful for that opportunity.”

His offseason was eventful mostly because he was engaged on Christmas Day to Stacey Harris, whom he met right before beginning college.

As for his relative lack of pitching experience, given he was a college shortstop and missed a year recovering from Tommy John surgery, deGrom has been a quick study. He said he particularly benefited from working with then-Mets rehab coordinator Randy Niemann at the Mets’ spring-training complex in 2011.

“I always played infield,” deGrom said. “Going to the mound, I didn’t really know what to expect. I was fortunate enough to get drafted, and I learned a lot in those first couple of years. I had a great coaching staff that really taught me a lot. Even in rehab, it really helped getting on a throwing program. Before, in college, I’d just pitch one day and then I’d play the field the next. I was never really on a strict program. Doing all that I think really helped teach me how to pitch.”