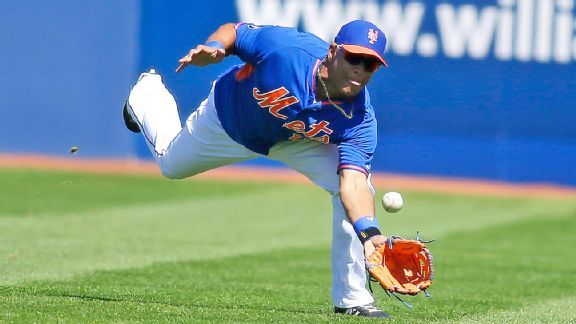 Terry Collins appreciates Juan Lagares' fielding prowess, but suggested the priority right now is putting the hottest bats in the lineup.WASHINGTON -- Terry Collins suggested Juan Lagares remains his preferred center fielder. So why has Lagares been out of the starting lineup for four of the past five games, including for Friday night’s series opener against the Washington Nationals?

The manager reasoned that Lagares is slumping, the result of chasing too many pitchers out the strike zone. And with the Mets in the midst of a 20-inning scoreless streak, Collins needs to have who he deems the best offensive producers in the lineup.

Collins pledged Lagares would start Saturday’s game against southpaw Gio Gonzalez, with the lefty-hitting outfielders going to the bench.

“Juan is the center fielder,” Collins said Friday afternoon. “We’ve got to somehow get his stroke back. He’s starting to expand the zone a little bit right now. When we get him back to where he’s taking some of those pitches, his defense is something we need, and we need very much. But we’re not scoring. So we’ve got to figure out how to get some runs.”

Collins is starting the 40-year-old Bobby Abreu in right field on Friday night, with Chris Young and Lagares sitting.

“If any of you guys have a crystal ball and you know when they’re going to hit it good, call me. Call me early, so I can put him in there,” Collins said. “Tonight I want to get Bobby in there, get some lefties in the lineup tonight. And tomorrow Juan and Chris will be both back in there and the lefties will have a day off. I’m not concerned defensively. What I’m more concerned about is we’ve got to start putting some runs on the board.”

While Lagares is Gold Glove-caliber, Collins added that he feels like capable alternatives exist to patrol center field, including Friday’s starter Curtis Granderson.

“I’m real comfortable with him in center field,” the manager said. “This guy can play center for you every day if we needed to. Right now, the defensive side, even though I’m a big believer in defense and the importance of defense, we’re not scoring. We’ve got to come up with some way to come up with some runs on the board. So I’m trying to put guys up there I think will drive in some runs.

“[Outfield] is where we have replacements. We’ve got five guys who can play. And you’ve got to get playing time for them. That means somebody can’t play. And, right now, we’re trying to play the guys who can give us some offense. And not that [Lagares] can’t. But right now he’s not. To put him back out there, now you’re talking about pinch-hitting for him. And if you get the lead late in the game is when you want him in the game. So there are no easy answers.

“I know it’s easy to talk about afterward that he should have been out there. We didn’t score, so it didn’t matter who was out there.”