ESPN Stats breaks down Lagares at plate
7yAdam Rubin
Carrasco has bone fragment removed from elbow
5d
A fans guide to abiding the LOL Mets
19dDevin Gordon
Jeff Passan answers 20 burning questions about the MLB playoffs
19dJeff Passan
What's next for the New York Mets after Luis Rojas' departure
20dBradford Doolittle and David Schoenfield
Mets move on from Rojas after 3rd-place finish
21d
Mets likely to make Rojas decision before others
25d
MLB Power Rankings: Where all 30 teams stand in the final week
25dESPN.com
Mets give Syndergaard start, shut deGrom down
26d
Your squad isn't going to the MLB playoffs? The No. 1 offseason question for each eliminated team
21dBradford Doolittle
Passan's early MLB free-agency tiers: Which stars are going to get paid this winter?
26dJeff Passan
MLB Power Rankings: Where all 30 teams stand as playoff picture comes into focus
32dESPN.com
Prospects who have taken the biggest step forward in 2021 for all 30 MLB teams
34dKiley McDaniel
May 17, 2014

WASHINGTON -- There is no disputing Juan Lagares' success at the plate has slowed down. After a three-hit game on May 4 at Coors Field, Lagares was hitting .338. Since then, he is 5-for-27 in 11 games (six starts).

Terry Collins cited Lagares' propensity to chase pitches out of the strike zone as a concern because opposing pitchers are exploiting it. 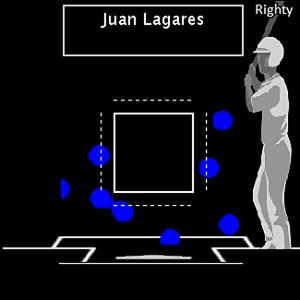 A look at the pitch location of Juan Lagares' eight outs on pitches that were outside the strike zone since May 5.

Still, according to ESPN Stats & Information's Mark Simon, Lagares actually is chasing pitches outside the strike zone (and missing on those swings) at a lower rate of late:

However, there's more to that analysis ...

Through May 4, Lagares had seven base hits on 46 swings at pitches out of the zone.

Since May 5, he has zero base hits on 21 swings at pitches out of the zone.

The Mets encourage as a philosophy selectivity at the plate -- swinging at pitches in your wheelhouse in the zone to maximize the ability to drive the ball.