Rapid Reaction: Nats 6, Mets 3
7yAdam Rubin
Carrasco has bone fragment removed from elbow
7d
A fans guide to abiding the LOL Mets
21dDevin Gordon
Jeff Passan answers 20 burning questions about the MLB playoffs
21dJeff Passan
What's next for the New York Mets after Luis Rojas' departure
23dBradford Doolittle and David Schoenfield
Mets move on from Rojas after 3rd-place finish
23d
Mets likely to make Rojas decision before others
28d
MLB Power Rankings: Where all 30 teams stand in the final week
27dESPN.com
Mets give Syndergaard start, shut deGrom down
29d
Your squad isn't going to the MLB playoffs? The No. 1 offseason question for each eliminated team
23dBradford Doolittle
Passan's early MLB free-agency tiers: Which stars are going to get paid this winter?
28dJeff Passan
MLB Power Rankings: Where all 30 teams stand as playoff picture comes into focus
34dESPN.com
Prospects who have taken the biggest step forward in 2021 for all 30 MLB teams
36dKiley McDaniel
May 18, 2014

WASHINGTON -- Zack Wheeler surrendered five runs for a second straight game and the Mets had a pair of costly baserunning gaffes as the Washington Nationals won Sunday’s rubber game, 6-3, at Nationals Park.

The Mets (20-23) have failed to win any of their past five series, unless you generously split the Subway Series in half because the four games were played in two boroughs.

Drew Storen, Tyler Clippard and Rafael Soriano combined to retire all nine batters they faced over the final three innings. 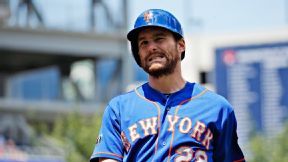 Daniel Murphy reacts to a called strike during the first inning Sunday.

Ian Desmond’s second-inning homer evened the score at 1. An inning later, after Ruben Tejada had a two-out fielding error on a backhand attempt on the outfield grass, Wilson Ramos produced a two-run double. Washington built a 5-1 lead against Wheeler on Ramos’ fifth-inning single, which plated the opposing pitcher Jordan Zimmermann as well as Denard Span.

The Mets have surrendered a hit to a pitcher in five straight games.

Wheeler maintained a 4.53 ERA while falling to 1-4. He also allowed five runs against the Yankees in his previous start, while logging 118 pitches in 4 1/3 innings in the Bronx.

Murphy’s flaw: Daniel Murphy continues to run into ill-advised outs on the bases.

Murphy extended his hitting streak to 10 games with a first-inning single and advanced to second on a one-out walk by Zimmermann to David Wright. Curtis Granderson then sent a grounder to first baseman Tyler Moore. Moore retired Wright at second base for the inning’s second out, and the Mets appeared poised to have runners on the corners with two outs and Lucas Duda due up. Instead, Murphy strayed too far around third base and was thrown out to end the inning.

Duda ending up producing a leadoff double off the right-center wall the following inning.

On May 4 at Colorado, Murphy -- trying to draw a throw home on a fake tag-up in the first inning -- was caught straying too far off third base and was retired 7-5-6 when the ball was cut off. Two days earlier, Murphy had been caught stealing at third base with Wright batting, similarly depriving the Mets of a potentially big first inning.

Murphy’s miscue on Sunday wasn’t the only mistake by the Mets on the basepaths.

After Juan Centeno produced a two-out RBI single for the second time in the game to pull the Mets within 5-3 in the sixth against Zimmermann, Centeno was thrown out trying to stretch the hit into a double. That stranded Juan Lagares at third base. Lagares had delivered an RBI single earlier in that frame.

What’s next: The Mets take a day off Monday, then play 20 games in 20 days. Justin Turner and the Los Angeles Dodgers visit Citi Field for a three-game series beginning Tuesday. Rafael Montero (0-1, 4.50 ERA) makes his second major-league start in the opener. He opposes Josh Beckett (1-1, 2.38).