GM not endorsing 10-month return from T.J.
7yAdam Rubin
Carrasco has bone fragment removed from elbow
6d
A fans guide to abiding the LOL Mets
20dDevin Gordon
Jeff Passan answers 20 burning questions about the MLB playoffs
20dJeff Passan
What's next for the New York Mets after Luis Rojas' departure
22dBradford Doolittle and David Schoenfield
Mets move on from Rojas after 3rd-place finish
22d
Mets likely to make Rojas decision before others
26d
MLB Power Rankings: Where all 30 teams stand in the final week
26dESPN.com
Mets give Syndergaard start, shut deGrom down
28d
Your squad isn't going to the MLB playoffs? The No. 1 offseason question for each eliminated team
22dBradford Doolittle
Passan's early MLB free-agency tiers: Which stars are going to get paid this winter?
27dJeff Passan
MLB Power Rankings: Where all 30 teams stand as playoff picture comes into focus
33dESPN.com
Prospects who have taken the biggest step forward in 2021 for all 30 MLB teams
35dKiley McDaniel
May 20, 2014

Asked if returning to competitive pitching 10 months after the procedure is not prudent across the board, or whether it may be OK under some circumstances, Alderson said Tuesday afternoon: "Not being a medical doctor and not really faced with that decision previously, I'll reserve judgment. But the one thing we don't want to do is be put in a situation where someone -- Matt, or anyone else -- has a setback because we've pushed the natural recovery processes further than we should have."

If the Mets are out of the race, it would seem unwise to have Harvey return to major-league action this season, especially given his value to the organization. 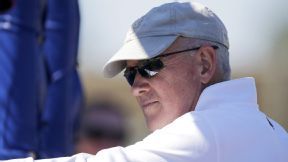 On whether Harvey's competitive nature might be a concern because it could result in the ace doing too much too quickly, Alderson said: "I think that's a consideration. I wouldn't put it at the level of a concern at this point."

Alderson said there continues to be study about the optimal recovery time from Tommy John surgery before competitive action, but "I don't think anything has changed" regarding 12 months being advisable.

Said Alderson: "I know that MLB is now taking a much more serious and in-depth look at these injuries and what might be appropriate for recovery and prevention of a second Tommy John. But I think MLB is still in the early stages of developing that information. There is something called a medical advisory committee that exists at the major-league level. That committee has been meeting recently. And I know these types of elbow injuries have been on the agenda and that they've had several experts who have made presentations. The injury and the frequency that we've experienced here recently is getting a lot of attention at MLB, which is the level where the attention should be placed, because they have access to substantially more data than any one club would. I'm hopeful that will turn out to be useful."

Alderson accepted that, in a general sense, it does give pitchers peace of mind if they have pitched in the majors before heading into the offseason.

"I would subscribe to that notion as a general proposition," Alderson said. "As it relates to Tommy John surgery and whether it's appropriate given the time frame that [Harvey]'s experienced or another pitcher might have experienced, that's an open question."