Rapid Reaction: Dodgers 9, Mets 4
7yAdam Rubin
Carrasco has bone fragment removed from elbow
4d
A fans guide to abiding the LOL Mets
18dDevin Gordon
Jeff Passan answers 20 burning questions about the MLB playoffs
18dJeff Passan
What's next for the New York Mets after Luis Rojas' departure
20dBradford Doolittle and David Schoenfield
Mets move on from Rojas after 3rd-place finish
20d
Mets likely to make Rojas decision before others
24d
MLB Power Rankings: Where all 30 teams stand in the final week
24dESPN.com
Mets give Syndergaard start, shut deGrom down
26d
Your squad isn't going to the MLB playoffs? The No. 1 offseason question for each eliminated team
20dBradford Doolittle
Passan's early MLB free-agency tiers: Which stars are going to get paid this winter?
25dJeff Passan
MLB Power Rankings: Where all 30 teams stand as playoff picture comes into focus
31dESPN.com
Prospects who have taken the biggest step forward in 2021 for all 30 MLB teams
33dKiley McDaniel
May 20, 2014

NEW YORK -- Home is where the heartache is for the New York Mets.

Rookie Rafael Montero lasted only 4 1/3 innings in his second major league start and the Mets twice flopped with bases-loaded, one-out opportunities as the Los Angeles Dodgers won 9-4 on Tuesday night at Citi Field.

With Philadelphia’s win against Miami, the Mets now are alone in last place in the National League East.

The game took 4 hours, 8 minutes -- a minute shy of matching the franchise record for a nine-inning game (4:09, done in 2000 at Dodger Stadium and 2005 against the Milwaukee Brewers).

Trailing by five runs, the Mets clawed back into the game in the bottom of the sixth against Dodgers starter Josh Beckett. Curtis Granderson had a solo homer and Lucas Duda had a two-run shot in the inning to pull the Mets within 6-4. It was Duda’s first homer since April 23 against St. Louis’ Seth Maness. 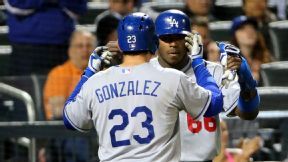 Still, there were wasted opportunities, including a pair of bases-loaded, one-out chances that went for naught. With the Mets trailing 5-1 in the fifth against Beckett, Daniel Murphy struck out and David Wright grounded out after fouling off three full-count pitches. With the Mets trailing 6-4 in the seventh, Chris Withrow sawed Duda’s bat in half and got a pop out to second base. Wilmer Flores then grounded into a fielder’s choice to again strand the bases loaded.

Out of control: Montero (0-2) was charged with five earned runs on seven hits and four walks in a 97-pitch effort that lasted only 4 1/3 innings. The rookie wriggled free of serious early trouble, stranding six baserunners through the first three innings, including the bases loaded in the second by striking out reigning co-NL Player of the Week Yasiel Puig.

Montero’s outing imploded in a four-run fifth as the Dodgers took a 5-1 lead. Montero walked Puig to open the inning and, with one out, fell behind in the count to Adrian Gonzalez, 2-0. Gonzalez followed by launching a tiebreaking two-run homer.

Montero could have been bailed out of further trouble, but Chris Young’s lack of range in center field -- at least relative to Juan Lagares’ -- cost the Mets. Young could not run down Matt Kemp’s shot to deep center, resulting in a double. Kemp then scored on Carl Crawford’s single, which chased Montero. Jeurys Familia allowed Crawford to score for the final run charged to Montero.

Montero has now allowed three home runs in two big league starts, matching the total he surrendered in eight starts in the hitter-friendly Pacific Coast League before his promotion. The second inning was particularly vexing Tuesday. Montero walked three Dodgers in that frame and surrendered a two-out RBI single to Beckett, the opposing pitcher. Opposing pitchers have now produced a hit in six straight games against the Mets.

Cameo: Justin Turner made a late appearance in his return to Citi Field. After Juan Uribe doubled in the ninth, he departed with an apparent recurrence of a hamstring injury. Turner pinch-ran and remained in the game for the bottom of the ninth.