Morning Briefing: The day after ...
7yAdam Rubin
A fans guide to abiding the LOL Mets
14dDevin Gordon
Jeff Passan answers 20 burning questions about the MLB playoffs
14dJeff Passan
What's next for the New York Mets after Luis Rojas' departure
16dBradford Doolittle and David Schoenfield
Mets move on from Rojas after 3rd-place finish
16d
Mets likely to make Rojas decision before others
21d
MLB Power Rankings: Where all 30 teams stand in the final week
20dESPN.com
Mets give Syndergaard start, shut deGrom down
22d
Your squad isn't going to the MLB playoffs? The No. 1 offseason question for each eliminated team
16dBradford Doolittle
Passan's early MLB free-agency tiers: Which stars are going to get paid this winter?
21dJeff Passan
MLB Power Rankings: Where all 30 teams stand as playoff picture comes into focus
27dESPN.com
Prospects who have taken the biggest step forward in 2021 for all 30 MLB teams
29dKiley McDaniel
May 27, 2014 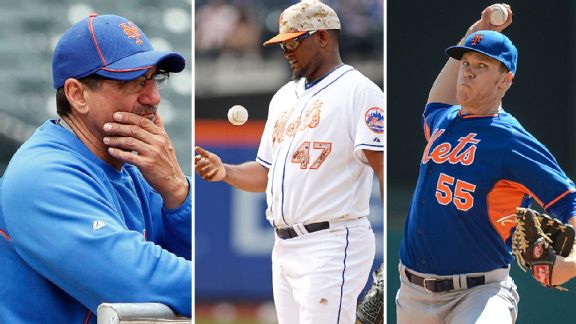 The Mets fired Dave Hudgens and released Jose Valverde late Monday, while Noah Syndergaard is headed to New York to get a forearm injury examined.NEW YORK

FIRST PITCH: No shortage of topics arose on Monday at Citi Field … and they mostly were negative.

On the day Ike Davis returned as a visitor, Dave Hudgens and Jose Valverde were shown the door. Also, Noah Syndergaard and Eric Young Jr. landed on disabled lists. And Jacob deGrom lifted his batting average to .800 but was deprived of his first major-league win.

Off the field, MRIs for Syndergaard and E.Y. Jr., apparently, as well as the debut of Lamar Johnson as hitting coach.

• Hudgens and Valverde lost their jobs in the aftermath of Monday’s defeat. Hudgens, who had been in his fourth season as hitting coach, will be replaced by Johnson, the organization’s minor-league hitting coordinator for the past decade. 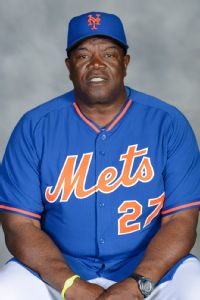 Lamar Johnson, who played first base for nine seasons in the majors, primarily with the White Sox, is the new hitting coach.

Vic Black is due to rejoin the Mets to replace Valverde. Black has flown from Las Vegas to New York to El Paso and now back to New York in the past three days.

Read more on the Hudgens and Valverde ousters in the Post, Daily News, Times, Journal, Record, Newsday and at MLB.com.

Read Hudgens’ pointed comments at MLB.com and in Newsday.

• Poised for his first win after tossing 6 2/3 scoreless innings and logging 122 pitches, deGrom instead was handed a no-decision when Scott Rice and Valverde failed to hold the lead. Valverde surrendered four runs over the final two innings in his last act as a Met. The Pirates ultimately beat the Mets, 5-3, on Memorial Day at Citi Field to drop the not-so-Amazin’s to 7-17 in May.

Read game recaps in the Post, Star-Ledger and at MLB.com.

• Syndergaard is due to be examined in New York on Tuesday because of a flexor pronator strain in his right forearm. Although the Mets downplayed the severity, the injury can be a precursor to Tommy John surgery. Syndergaard tweeted that he should be fine.

• Davis was greeted with polite applause in his first game back at Citi Field since the April 18 trade. He went 0-for-2 with a walk before being replaced by righty-hitting platoon mate Gaby Sanchez in the eighth.

“I didn’t get booed as much as I thought [I would],” Davis told Zach Braziller in the Post. “There was a lot of cheering. So it was really nice.”

Davis said pregame that one big difference between Pittsburgh and New York is he now does not get hitting tips from fans when he goes out for coffee in the morning.

Read more in the Star-Ledger.

• Travis d’Arnaud went 0-for-4 as the DH in his second rehab game with Binghamton as he returns from a concussion. D’Arnaud is due to catch Tuesday for the B-Mets. He could be activated from the disabled list as soon as Wednesday.

• E.Y. Jr. officially landed on the DL with a right hamstring injury on Monday morning. Matt den Dekker joined the club. Den Dekker struck out to end Monday’s game after entering on a double-switch in the top of the ninth. E.Y. Jr. is due to get an MRI on Tuesday to learn the severity of his injury. Read more in the Star-Ledger.

• Collins suggested the Mets are being cautious with Dillon Gee, who did not feel comfortable getting on a mound Sunday because of a lingering issue with a strained lat muscle.

• Columnist Kevin Kernan in the Post said the heat is on Sandy Alderson. Writes Kernan:

The general manager has to look in the mirror and question his performance for his part in the Mets’ terrible 7-17 May and overall 22-28 record. Owners don’t fire themselves, and that is especially true of the Wilpons -- so progress must be shown, and quickly.

Alderson’s promise of young arms must save games and jobs.

• Amed Rosario, who signed with the Mets for $1.75 million, is headed to Savannah … for a short stay.

According to Dave Hudgens Mets fans have a -28 WAR this season. #Mets

YOU’RE UP: Can Lamar Johnson make a difference with the Mets’ hitters?