FIRST PITCH: Considering the Mets play better on the road than at home, they are in luck. Twenty-five of the Amazin’s next 33 games are away from Citi Field, beginning with a swing through Philadelphia, Chicago and San Francisco.

The Mets play a five-game series in Philly because of an April 30 rainout at Citizens Bank Park.

Sixteen days after being struck on the top of the head with a backswing at Yankee Stadium and receiving a concussion, Travis d’Arnaud will be active. Juan Centeno has been returned to Triple-A Las Vegas. Centeno hit .238 with two RBIs in six starts.

• Bartolo Colon and Jeurys Familia combined on the shutout as the Mets beat the Pirates, 5-0, Wednesday afternoon at Citi Field to complete a 4-5 homestand. Colon notched his 2,000th career strikeout by catching Ike Davis looking in the sixth. The 41-year-old Colon threw 121 pitches, his most since logging 128 with the Angels at Tampa Bay on Aug. 18, 2004. 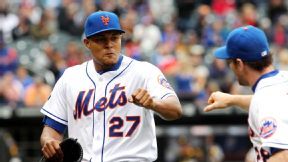 Jeurys Familia had a five-out save and a hit Wednesday.

Familia recorded his first major-league hit in addition to a five-out save. Jenrry Mejia and Familia produced multi-inning saves on consecutive days against the Pirates. It marked the first time a pair of Mets had produced back-to-back saves of at least five outs apiece since Roberto Hernandez and Aaron Heilman had consecutive two-inning saves Sept. 26-27, 2005 at Philadelphia, according to the Elias Sports Bureau. Six different Mets have saves his season -- more than any other team.

Davis had a quiet return to Citi Field, going 0-7 with a walk and two strikeouts.

• Read more on Duda in the Post and Daily News.

• Wright -- who may end up getting hurt by so many Mets road games during the voting period -- ranks third at third base in the initial NL All-Star voting tally released by MLB on Wednesday. Wright (278,840) trails Colorado’s Nolan Arenado (318,111) and Milwaukee’s Aramis Ramirez (282,843). Arenado, who is hitting .305 with six homers and 28 RBIs, broke his left middle finger on a headfirst slide into second base last Friday.

No other Mets position player appears in the top five at his position in voting (or top 15 in the outfield). Read more at MLB.com.

• The Mets labeled the report that Jeff Wilpon ordered the firing of Dave Hudgens “substantively inaccurate.” Substantively, of course, means a considerable amount. In reality, Sandy Alderson, as would be predicted, acknowledged some ownership input in that decision.

“What I try to do is evaluate what’s going on on the field and make the appropriate judgments, and that’s my responsibility,” Alderson told John DeMarzo in the Post. “I talk to ownership from time to time. I talk to Fred. I talk to Jeff, and I have a sense of what they’re thinking or what their frustrations may be. But, ultimately, I have to make a baseball decision, I guess, and that’s what this was.”

• Terry Collins says the back end of the bullpen is taking shape with Mejia, Familia and Vic Black. Read more in the Post, Star-Ledger, Record and at MLB.com.

• Chris Young, now hitting .195, has all but lost his starting job with the Mets. He started Thursday after three straight days out of the lineup. “It’s my responsibility to swing the bat better and play better,” Young told Anthony Rieber in Newsday. “I hold myself fully accountable for that. When I do get that opportunity, I do need to take more advantage of it to where I force myself into the lineup everyday like I want to be.”

• Columnist Bill Madden in the Daily News sums up the Mets’ hitting-coach change this way:

Either you can hit or you can’t.

Yes, the Mets stink, but so do a lot of teams.

The key is for the Mets to stink less.

• Kirk Nieuwenhuis had two homers and Jeff Francoeur ended up pitching a scoreless inning with a walk and hit batter for El Paso as Las Vegas won, 13-7. Starting pitcher Rainy Lara was injured on a play at the plate and Binghamton split with New Hampshire. Brandon Nimmo reentered the lineup and stole a base a day after leaving a game with a sprained ankle as St. Lucie beat Brevard County, 3-2. Read the full minor-league recap here.

• Nick Evans is back in the big leagues for the first time since 2011, when he was a Met. The Arizona Diamondbacks promoted the 28-year-old Evans, a Phoenix native, on Thursday. The year after leaving the Mets, Evans missed most of the season with the Pirates in the minors because he shattered bones in his left hand diving to catch a foul ball. Read more in the Arizona Republic and at ArizonaSports.com.

• Denis Hamill in the Daily News writes about Wright’s monthly salute to the NYPD.

• From the bloggers … Mets Police seeks your help in crowdsourcing 41 amazin’ ideas for the Mets.