Morning Briefing: Eternal series nearly over
7yAdam Rubin
A fans guide to abiding the LOL Mets
14dDevin Gordon
Jeff Passan answers 20 burning questions about the MLB playoffs
14dJeff Passan
What's next for the New York Mets after Luis Rojas' departure
16dBradford Doolittle and David Schoenfield
Mets move on from Rojas after 3rd-place finish
16d
Mets likely to make Rojas decision before others
20d
MLB Power Rankings: Where all 30 teams stand in the final week
20dESPN.com
Mets give Syndergaard start, shut deGrom down
22d
Your squad isn't going to the MLB playoffs? The No. 1 offseason question for each eliminated team
16dBradford Doolittle
Passan's early MLB free-agency tiers: Which stars are going to get paid this winter?
21dJeff Passan
MLB Power Rankings: Where all 30 teams stand as playoff picture comes into focus
27dESPN.com
Prospects who have taken the biggest step forward in 2021 for all 30 MLB teams
29dKiley McDaniel
Jun 2, 2014

FIRST PITCH: For the first time in franchise history, the Mets are playing five straight days against the same opponent on the road. The series against the Philadelphia Phillies finally concludes on Monday at 7:05 p.m., with the Amazin’s already having earned the series win.

• After being forced to leave Sunday’s game in the 10th inning with pain in his right rib cage, Juan Lagares is due to undergo an MRI on Monday morning at the Hospital for Special Surgery in Manhattan. The expectation is Lagares will land on the disabled list. Matt den Dekker, who was demoted before Sunday’s game to clear a roster spot for the addition of extra arm Dana Eveland, never left for Las Vegas and should be re-promoted assuming Lagares lands on the DL. Read more in the Post, Newsday, Star-Ledger and at MLB.com.

• For the fourth time in franchise history, the Mets have played three straight extra-inning games. In the latest installment, they came away a winner Sunday. Lucas Duda had a tiebreaking two-run homer in the top of the 11th and the Mets held on for a 4-3 win against the Phillies. 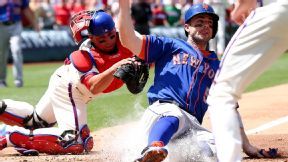 The teams have now played 14-, 14- and 11-inning games the last three days. It is the first time in the majors that a pair of teams played three straight games of at least 11 innings since the Seattle Mariners and Toronto Blue Jays did so Sept. 16-18, 1991.

Jonathon Niese required only 91 pitches to navigate eight innings. He departed for a pinch hitter to open the ninth with the score tied at 2.

Duda has four game-winning RBIs this season, tied with David Wright for the team lead.

“That kind of juice got him to the big leagues,” Terry Collins said about Duda’s decisive homer against Phillippe Aumont, which went to left-center.

• Tyler Kepner in the Times catches up with 30-year-old Jeff Francoeur, who is trying to revive his career with Triple-A El Paso, a San Diego Padres affiliate. Frenchy is hitting .278 with nine homers in 53 games, but it’s his mound activity that has been creating a stir. He has appeared in six lopsided games this season to save the pitching staff -- including four against the Mets’ affiliate, Las Vegas. All but one of Francoeur’s relief appearances has been scoreless, with the lone blemish in the other coming on a three-run homer by Andrew Brown. Francoeur has allowed four hits, three walks and hit three batters in 5 1/3 innings.

“Say something happens,” Francoeur told Kepner. “I’ve talked to my wife about it: I absolutely would give it a go, pitching, before I got out of baseball. Because one thing about me, I’ve always had one of the best arms in baseball, and it’s very accurate. I throw strikes. I’d love to. It would be fun.”

Said El Paso manager Pat Murphy: “He’s an authentic little boy. The little kid that’s good for everybody to have is still in him. That’s what makes it special being around him every day.”

• Jim Chairusmi in the Journal catches up with former Mets catcher Paul Lo Duca, who now is an analyst for the horse-racing network TVG. "I take it very seriously," Lo Duca told Chairusmi. "Baseball was always my love and horse racing is my passion. While some people play fantasy football, I play the horses."

As for his former teammate Wright, Lo Duca added: "They've given David no help. They build a mammoth ballpark that isn't attractive to free agents. I hope he gets a chance to be on a contending team again."

• Lynn Worthy in the Binghamton Press & Sun-Bulletin profiles catching prospect Kevin Plawecki. The Purdue product hit .359 with five homers and 28 RBIs in 103 at-bats in May for the Double-A B-Mets.

• Josh Satin is hitting .320 with two homers and 10 RBIs and has a .365 on-base percentage in 20 games since a demotion to Las Vegas. He primarily has played second base, his original position in the minors.

“I was almost relieved a little bit because I needed some time to get right with my swing,” Satin told Todd Dewey in the Las Vegas Review-Journal about his May 10 demotion. “Last year, being here and getting [220] at-bats really helped me. When I went up there, I was ready to play. Obviously I wasn’t thrilled to get sent down here, but I knew it was the right thing for me.”

• Bobby Abreu isn’t a Hall of Famer, but his numbers -- including a career JAWS of 51.2, 17th all time for a right fielder -- surprisingly are not that far off, the Times writes.

• From the bloggers … Faith and Fear feels pretty good about the Mets' advantage over the Phillies in the mascot department.

BIRTHDAYS: Mike Stanton -- the former lefty reliever, not slugger now known as Giancarlo -- turns 47. … Kelvin Chapman was born on this date in 1956. … Reid Cornelius is 44.

If mets new bullpen keeps it up then there will be a ton of wins in the future. It's all coming together

YOU’RE UP: How should Terry Collins configure his outfield minus Juan Lagares?