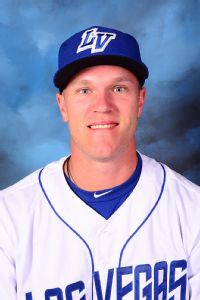 CHICAGO -- Top prospect Noah Syndergaard was forced from Thursday's Triple-A Las Vegas game with two outs in the first inning after colliding at the plate with Mark Minicozzi after issuing a wild pitch.

"Noah Syndergaard was removed from the game tonight in Las Vegas after experiencing left shoulder discomfort resulting from a tag play at home plate," the Mets said in a statement. "The results of precautionary X-rays are pending."

It was Syndergaard's first appearance since May 21. He had been on the disabled list for a flexor tendon strain in his right forearm that required a visit to New York to be examined by team doctors.

"He was fighting to save a run, but you don't want your pitchers diving into home plate like that because stuff like that can happen," manager Wally Backman told Todd Dewey of the Las Vegas Review-Journal postgame.

Syndergaard was registering 97 mph before the injury.

"His velocity was way up there," Backman said. "He was throwing hard. But it's hard to evaluate 2/3 of an inning."