Mets execs weigh in on NY draft picks
7yAdam Rubin
Carrasco has bone fragment removed from elbow
15h
A fans guide to abiding the LOL Mets
15dDevin Gordon
Jeff Passan answers 20 burning questions about the MLB playoffs
15dJeff Passan
What's next for the New York Mets after Luis Rojas' departure
17dBradford Doolittle and David Schoenfield
Mets move on from Rojas after 3rd-place finish
17d
Mets likely to make Rojas decision before others
21d
MLB Power Rankings: Where all 30 teams stand in the final week
21dESPN.com
Mets give Syndergaard start, shut deGrom down
23d
Your squad isn't going to the MLB playoffs? The No. 1 offseason question for each eliminated team
17dBradford Doolittle
Passan's early MLB free-agency tiers: Which stars are going to get paid this winter?
22dJeff Passan
MLB Power Rankings: Where all 30 teams stand as playoff picture comes into focus
28dESPN.com
Prospects who have taken the biggest step forward in 2021 for all 30 MLB teams
30dKiley McDaniel
Jun 7, 2014

SAN FRANCISCO -- The Mets took a pair of right-handed pitchers with Long Island ties on Day 3 of the draft: Jim Duff from Stonehill (Mass.) College, who hails from Garden City, in the 20th round and Tyler Badamo from Oakdale's Dowling College and Mount Sinai in the 24th round. 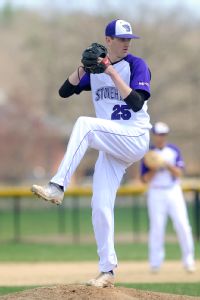 On Duff, amateur scouting director Tommy Tanous said: "He pitched fairly close to my house. He's about 20 minutes from my house. He was just up at our workout recently. Our area supervisor Mike Pesce has been on Duff quite a bit this year. A big kid. A strike thrower. A lot of groundballs. Anywhere from 86-90 mph. A really reliable kid. A strike thrower at that size (6-foot-6). So kind of an interesting kid."

On Badamo, Tanous said: "A three-pitch mix -- actually, four at times -- with anywhere from 88 to 92 mph. A curveball, slider. Another strike thrower. Those are the guys we tend to like."

As for drafting players in late rounds who have since reiterated their intention to go to college, such as University of Arkansas-bound right-hander Keaton McKinney (28th round), Tanous said:

"Sometimes you take shots at guys in the lower rounds. Sometimes things change and we get a chance to watch them for the summer and evaluate them. Sometimes the players change their minds about professional baseball.

"You get a chance at getting a player, which will feel like we did several times, that really doesn't belong in the 11th round, the 12th round, and you take a shot."