Wheeler (2-5, 3.89 ERA) has contributed two straight solid efforts on the road trip. He has combined to limit the Philadelphia Phillies and Chicago Cubs to one run on six hits and two walks while striking out 16 in 13 innings.

The Mets have not been swept by the Giants since 2002, when San Francisco ran the table in three-game series at Shea Stadium and what was then known as Pac Bell Park. 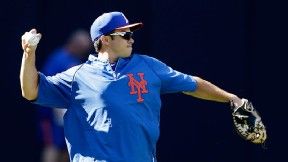 Travis d'Arnaud was demoted to the minors late Saturday.

The Mets (28-34) complete a stretch of 20 games in 20 days with the series finale at AT&T Park. They also wrap up a three-city trip in which they went 4-1 in Philly, then got swept at Wrigley Field.

• Travis d’Arnaud, expected to be a cornerstone of the Mets’ rebuilding, again is a minor leaguer. Three-for-26 since returning from the disabled list for a concussion and hitting .180 for the season, d’Arnaud was demoted to Triple-A Las Vegas after Saturday’s game. Ex-Oriole/Ranger Taylor Teagarden will join the Mets on Sunday. Read more in the Post, Daily News, Newsday, Star-Ledger and at MLB.com.

• Terry Collins and David Wright spoke to the players during a pregame team meeting Saturday about staying positive, but the Mets went on to lose to the Giants, 5-4, in walk-off fashion. Jenrry Mejia suffered his first blown save. Wright committed a critical sixth-inning throwing error that led to two unearned runs.

The Mets have now lost 20 games this season in which they held a lead -- the most in the majors.

• Wright will be out of the starting lineup Sunday for the first time this season. With the Mets on a five-game losing streak, he asked Collins to play, but was rebuffed by the manager. Read more in the Star-Ledger. 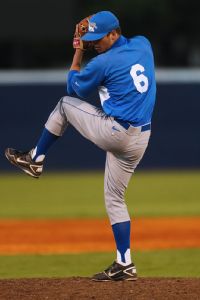 Courtesy of the University of Memphis

The Mets selected University of Memphis right-hander Bryce Beeler in the 19th round of the draft.

Connecticut prep right-hander Bradley Wilpon, the son of Jeff Wilpon and grandson of Fred Wilpon, was selected in the 36th round by the Boston Red Sox. He will not sign and instead is headed to the Wharton School of Business and to play for the Penn baseball team.

Read features on Badamo at MLB.com and Baseball on the Island. Read more the Mets’ draft in the Record.

• Tim Rohan in the Times reviews the Mets’ ill-fated trade of Angel Pagan to the Giants for Andres Torres and Ramon Ramirez. Read more in the Star-Ledger.

• Columnist Kevin Kernan in the Post discusses the state of the Mets.

• Matt den Dekker is hitting .192 this season, and Collins suggested Ruben Tejada may get time in the leadoff spot.

• Juan Lagares, on the disabled list with a strained intercostal muscle on his right side, is not free of discomfort and therefore is not yet permitted to do work that requires rotating his torso.

• X-rays of 2011 first-round pick Brandon Nimmo’s right wrist revealed no fracture. Nimmo, who nonetheless was out of the lineup Saturday with St. Lucie, was hit by a pitch the previous day.

• Lenny Dykstra speaks with Mark Bowman at MLB.com about his son Luke being drafted in the seventh round by the Atlanta Braves.

• From the bloggers … Faith and Fear imagines Branden and Alexa going rogue.

Apparently I was at the Giants game today. http://t.co/79n9mzLa3y

YOU’RE UP: Did the Mets make the right call demoting Travis d’Arnaud?