Rapid Reaction: Giants 6, Mets 4
7yAdam Rubin
Carrasco has bone fragment removed from elbow
8d
A fans guide to abiding the LOL Mets
22dDevin Gordon
Jeff Passan answers 20 burning questions about the MLB playoffs
22dJeff Passan
What's next for the New York Mets after Luis Rojas' departure
23dBradford Doolittle and David Schoenfield
Mets move on from Rojas after 3rd-place finish
24d
Mets likely to make Rojas decision before others
28d
MLB Power Rankings: Where all 30 teams stand in the final week
28dESPN.com
Mets give Syndergaard start, shut deGrom down
30d
Your squad isn't going to the MLB playoffs? The No. 1 offseason question for each eliminated team
24dBradford Doolittle
Passan's early MLB free-agency tiers: Which stars are going to get paid this winter?
29dJeff Passan
MLB Power Rankings: Where all 30 teams stand as playoff picture comes into focus
35dESPN.com
Prospects who have taken the biggest step forward in 2021 for all 30 MLB teams
37dKiley McDaniel
Jun 8, 2014

SAN FRANCISCO -- The New York Mets return to the Big Apple a season-worst seven games under .500 and on a season-high six-game losing streak.

Zack Wheeler had his shortest career start. And despite a two-homer game from Curtis Granderson, the Mets were swept for the second straight series, this time with a 6-4 loss to the San Francisco Giants on Sunday at AT&T Park.

The Mets pulled within a run and had the tying run at third base in the eighth inning, but stranded Granderson when Chris Young flied out against Jean Machi. Vic Black surrendered an RBI single to Brandon Hicks in the bottom half after inheriting a baserunner at second from Scott Rice.

After winning four of five games in Philadelphia to open thid three-city trip, the Mets (28-35) went winless in Chicago and San Francisco. The Giants swept a series from the Mets for the first time since 2002. San Francisco is an MLB-best 42-21. 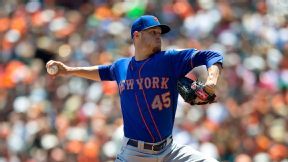 Tripped up: The ex-Giants farmhand Wheeler lasted 3 2/3 innings. He surrendered four runs on six hits and two walks in an 86-pitch effort.

Wheeler had entered the start off dominant performances against the Phillies and Cubs earlier in the trip. He limited them to a combined one run on six hits and two walks in 13 innings.

Josh Edgin handled the final out of the fourth, getting lefty-hitting Gregor Blanco to fly out to strand two inherited baserunners. Dana Eveland followed with two scoreless relief innings, but Carlos Torres surrendered an RBI single to Blanco in the seventh as San Francisco opened a 5-3 lead.

Sunday marked Wheeler’s third time pitching against the club that traded him to the Mets for Carlos Beltran in 2011.

Wheeler allowed one run in seven innings at AT&T Park last July 10. He then walked six while allowing four runs in five innings against the Giants at Citi Field on Sept. 17. Wheeler was shut down for the season because of an innings cap after that start.

Deep thoughts: Granderson produced the 15th multi-homer game of his career, and first since Oct. 3, 2012 with the Yankees against the Boston Red Sox. He opened the scoring in the first inning with a two-run shot against Tim Lincecum. Granderson then pulled the Mets within 4-3 in the sixth with a solo shot against Lincecum that landed in McCovey Cove.

Granderson’s first shot measured 439 feet, the second-longest homer by a Met this season, according to ESPN Stats & Information research. Travis d’Arnaud had a 448-foot homer against Chad Bettis at Coors Field on May 1. The McCovey Cove shot registered 402 feet.

Granderson’s first-inning damage might have been bigger, but leadoff man Matt den Dekker was caught stealing when he broke for third base with Lincecum still holding the baseball.

In a pinch: David Wright did not get a full day off in his first non-start of the season. He pinch hit against reliever Juan Gutierrez with two outs and Eric Campbell at first base in the seventh. Wright struck out.

What’s next: After playing 20 games in 20 days, the Mets exhale Monday after an overnight flight back to New York. The Amazin’s host the Milwaukee Brewers for a three-game series beginning Tuesday. Daisuke Matsuzaka (2-0, 3.21 ERA) opposes right-hander Marco Estrada (5-2, 4.19) in the 7:10 p.m. series opener.