NEW YORK -- In a Q&A with season ticket holders Saturday afternoon at Citi Field, Sandy Alderson was asked whether the payroll would increase from its current level (about $85 million) in 2015. Here's the full text of how the GM replied:

"Well, coming into this season we did have money to spend," Alderson said. "It was money that had come off the books and reallocated. So we signed Curtis Granderson, Bartolo Colon. We brought in Chris [Young]. We did some other things. So our payroll this year is roughly the same as it was last year, but we reinvested quite a bit of that money.

"Look, what I have said on many occasions is it's not up to you to come and create a situation where we can improve our payroll. We need to play better with what we have. And I don't define that in terms of payroll, but with the players that we have. We're two months into this season. As I said, I think we're close. And I think we have the capacity to play better. Statistically, we've got to get back to ... average with respect to wins with one-run leads and that sort of thing. 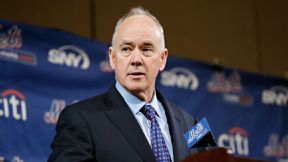 Sandy Alderson again addressed the Mets' payroll Saturday, this time with season ticket holders."So are we going to increase the payroll next year? I think that's something that we deal with after this season is over. If we're in a position [where] we're competing, we're vying for a wild-card spot or a division championship on July 31, I think we have the capacity to make a move. There's no question about that.

"Look, with all of the frustration and disappointment that some of us feel, No. 1, it's a fairly recent phenomenon. You know, 10 days ago we were a game under .500. And we had a tough road trip. And I'm not trying to make excuses for me or the team or the players. We went into Philadelphia and won four out of five. That was an exhausting series. There's no question about that. And I think we got to Chicago and were maybe a little bit tired. Not an excuse. A lot of close games. We didn't win them. We played a better-than-Chicago-Cub team in San Francisco. All of those games were close. That was a six-day shutout. And that's what got us to where we are right now.

"But, as I said before, we have some strengths. The pitching is a strength. We're getting there offensively. We're finding where we can fit the pieces in that lineup. I really do believe that we are close. So let's focus on what we have between now and the trade deadline. Let's see where we are. And then in the offseason, that's another question you can ask me and I'll have to answer again, for sure."