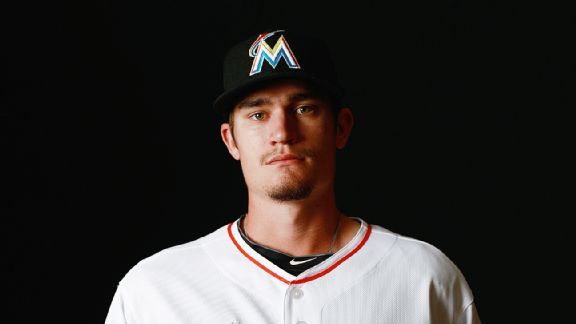 • Giancarlo Stanton produced his National League-leading 20th homer on Wednesday, but departed the game against the Chicago Cubs after six innings with a bruised left wrist. Stanton, who also leads the NL with 57 RBIs, predicted to reporters he would be back in the lineup for the series opener against the Mets. The injury occurred on an attempted catch of ex-teammate Chris Coghlan’s double at the outfield wall in the first inning. “It was getting tighter and tighter,” Stanton said. “On swings and misses, it hurts a lot.” 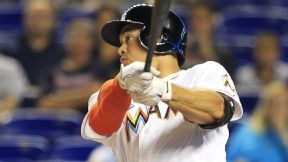 • Right-handed reliever Kevin Gregg will be promoted from Triple-A New Orleans and catcher Jarrod Saltalamacchia (concussion) is expected to be activated from the disabled list on Thursday. In advance of those moves, the Marlins demoted left-hander Dan Jennings and catcher J.T. Realmuto. Gregg had signed a minor league contract on June 3.

The 23-year-old Heaney, the ninth overall pick in the 2012 draft out of Oklahoma State and the Marlins’ top prospect, will make his major league debut against the Mets in the series opener. The Marlins are looking for a rotation jolt after ace Jose Fernandez underwent Tommy John surgery on May 16. Heaney went a combined 7-2 with a 2.35 ERA in Double-A and Triple-A this season. His fastball sits at 90-94 mph. He also has a solid slider and changeup.

• Anthony DeSclafani, who was recalled from the minors on Sunday, also has stepped into the rotation, with Jacob Turner reassigned to the bullpen. DeSclafani made his major league debut on May 14. He became the ninth Marlin, and first since Adalberto Mendez on Sept. 6, 2010, to win his major league debut as a starter. Baseball America rated DeScalfani the No. 5 prospect in the organization entering the season. He graduated from Colts Neck (N.J.) High School and then pitched at the University of Florida. He was acquired from the Toronto Blue Jays in the Nov. 19, 2012, trade that shipped out Jose Reyes and Josh Johnson.

• Second baseman Rafael Furcal made his Marlins debut Friday. It marked his first major league action since Aug. 30, 2012, with the St. Louis Cardinals. He missed all of last season recovering from spring-training Tommy John surgery. A left hamstring strain resulted in Furcal opening this season on the disabled list. He then suffered a groin strain in May while on a rehab assignment. Four different players had manned second base during Furcal’s more-than-two-month absence: Derek Dietrich, Ed Lucas, Jeff Baker and Donovan Solano. Furcal, 36, signed a $3.5 million contract with the Marlins on Dec. 5.

• The Marlins acquired reliever Bryan Morris from the Pittsburgh Pirates on June 1 in exchange for the 39th overall pick in this month’s draft. Morris since has made seven scoreless appearances spanning 9 1/3 innings.

• Miami signed Brad Penny, a member of its 2003 championship team and a former teammate of manager Mike Redmond, to a minor-league deal on Wednesday. Penny, 36, last appeared in the majors in 2012, compiling a 6.11 ERA in 22 relief appearances with the San Francisco Giants.