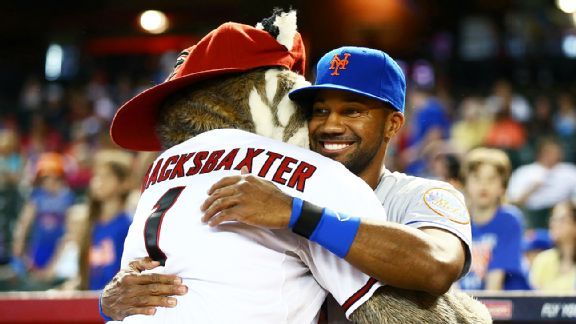 The Mets are seriously weighing releasing Chris Young when Juan Lagares returns, a source told ESPNNewYork.com.PORT ST. LUCIE, Fla. -- Juan Lagares' rehab tour has shifted to Double-A Binghamton, and the Mets are eyeing Thursday for the center fielder's activation from the disabled list.

So doesn't Kirk Nieuwenhuis just get demoted to Las Vegas once Lagares returns from the intercostal strain on his right side?

Not necessarily, especially after Nieuwenhuis' two-double game Sunday in Miami.

A team insider acknowledged Chris Young's "days are numbered" with the organization, which is prepared to eat the remainder of this year's $7.25 million salary. The internal debate at this point centers on whether to pull the trigger this week, and it's definitely being seriously weighed, a source told ESPNNewYork.com.

After last year's flop with Oakland (.200, 12 HR, 40 RBIs), Young nonetheless received the lucrative one-year deal from the Mets on Nov. 26. He is hitting .201 with four homers and 17 RBIs in 179 at-bats this season. He also has been underwhelming on the occasions the Mets have used him in center field.

Assuming Collins starts Young against left-handers Scott Kazmir and Brad Mills during the two-game midweek Oakland Athletics series, that may be the ex-Diamondback's last chance to save his job.

Because the A's are starting a pair of southpaws, Nieuwenhuis probably is done stating his case to remain in the majors, with the exception of entering in-game after a pitching change. Through two tours with the Mets this season, the lefty-hitting Nieuwenhuis is hitting .292 with a homer and six RBIs in 24 at-bats, including some clutch production.