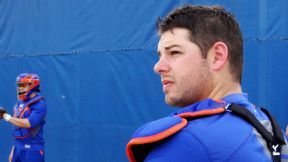 PORT ST. LUCIE, Fla. -- Logjam or not at catcher in Triple-A, Kevin Plawecki is due to be promoted to Las Vegas Vegas very shortly, an organization source told ESPNNewYork.com.

Plawecki was the 35th overall pick in the 2012 draft, out of Purdue. The Mets received that extra pick as compensation for losing Jose Reyes to the Miami Marlins.

Plawecki will have the priority for playing time once he is promoted to Las Vegas. So assuming Anthony Recker is optioned to Triple-A once Travis d'Arnaud is promoted, Recker would go from a major leaguer to a backup in the Pacific Coast League. If it's Taylor Teagarden the Mets drop, that is one more reason for Teagarden to opt out rather than report to Vegas.

Juan Centeno, a 40-man roster member, will be penalized, too. If Plawecki and Recker are in Triple-A, Centeno could be pushed down a level. If it's Teagarden who is dropped from the major league team and is claimed off waivers or opts out, Centeno still recedes to the backup with Las Vegas.