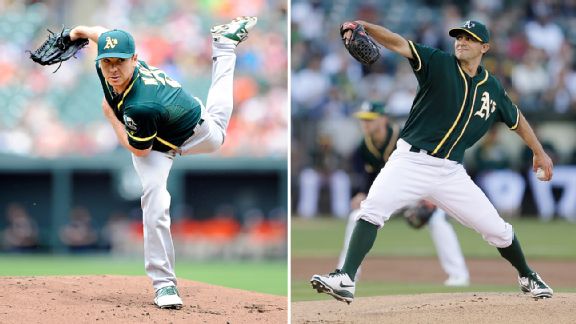 The Mets are due to face left-handers Scott Kazmir and Brad Mills during a two-game series against Oakland.METS (35-41, fourth place/NL East) vs. OAKLAND ATHLETICS (47-29, first place/AL West)

• Sonny Gray (7-3, 2.91 ERA) had been lined up to face the Mets in the series opener, but will have his start pushed back to Saturday at Miami to conserve the 24-year-old ace’s innings. He has tossed a team-high 99 innings this season.

The ex-Mets farmhand Kazmir, 30, will be pitching in Queens for the first time since the notorious July 30, 2004, trade that sent him to Tampa Bay for Victor Zambrano. Kazmir struck out 12 Mets in six scoreless innings in his first meeting against his original club last September in Cleveland.

Kazmir is 4-0 with a 1.27 ERA and .184 opponent batting average in his past five starts. Overall, his 2.08 ERA leads the American League, narrowly ahead of runner-up Masahiro Tanaka of the Yankees (2.11). Kazmir’s average fastball velocity is 90.8 mph this season, down from 92.5 mph a year ago with the Indians, but significantly higher than his 86.5 mph with the Los Angeles Angels in 2011, when he was dumped and his career appeared done.

Kazmir told ESPNNewYork.com last year about facing the Mets for the first time: “I guess you can say there will always be something there from it being the team that drafted me. But it just feels like so long ago. I’m just concentrating on what I have to do and not really worried about too much of the significance of the game.

“When I was there, it was a completely different staff, front office, players and everything. Plus, I never really got to the big leagues with the Mets. It’s nice to see the guys that I got drafted with and stuff like that, but it just seems like I’ve already turned the page.”

• Brad Mills, 29, made his A’s debut Friday against Boston. He allowed three runs (two earned) on four hits and four walks and threw 94 pitches in four innings. He had been 4-2 with a 1.56 ERA in 14 appearances (12 starts) for Triple-A Nashville in the Milwaukee Brewers organization this season before Oakland purchased his contract for $1. Mills took over in the rotation for Drew Pomeranz, who punched a chair after a poor start and fractured his right hand. 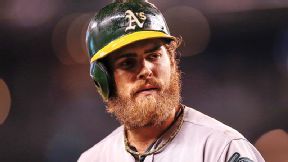 Josh Reddick is returning from the disabled list to face the Mets.

• Right fielder Josh Reddick (.214, 4 HR, 22 RBIs) will return from the disabled list for Tuesday’s series opener. He already had a rehab assignment for a hyperextended right knee.

• Kyle Blanks departed Sunday’s game with a left calf strain and will be placed on the DL. Blanks has been platooning with Brandon Moss at first base. The righty-hitting Blanks, 27, was acquired from the San Diego Padres on May 15 for Jake Goebbert and player-to-be-named Ronald Herrera. He is hitting .333 (15-for-45) with two homers and seven RBIs since the trade.

• Oakland third baseman Josh Donaldson leads by more than one million votes over Texas’ Adrian Beltre in the latest American League All-Star balloting at third base. Yoenis Cespedes has climbed to fourth among outfielders, while No. 2 Derek Norris now trails leader Matt Wieters of the Baltimore Orioles by 365,920 votes at catcher.

Oakland carries three catchers. Norris was struck in the head on a backswing by Boston’s Jonathan Herrera. He reportedly passed a concussion test, but has been struck multiple times before.

• A’s manager Bob Melvin and bench coach Chip Hale were among the serious candidates for the Mets managerial job that went to Terry Collins. Melvin said he is definitely interested in seeing the ex-A’s pitcher Colon bat. “We may walk Bartolo intentionally a couple of times just to get him on the basepaths, see him run around a little bit,” Melvin joked to Bay Area media.

• The A’s are the lone major league team not to use a rookie this season.

• Left-hander Sean Doolittle has not allowed a run in his past 22 appearances. The 24 1/3 scoreless innings streak is the longest active streak in the AL. He is the first pitcher since 1900 to strike out 45 while issuing no more than one walk to begin a season, according to the Elias Sports Bureau.

• Former Rockies left-hander Jeff Francis has appeared in five games in relief since being claimed off waivers from the Cincinnati Reds on May 18.