Why you root for the Mets
11yMark Simon
Carrasco has bone fragment removed from elbow
7d
A fans guide to abiding the LOL Mets
21dDevin Gordon
Jeff Passan answers 20 burning questions about the MLB playoffs
21dJeff Passan
What's next for the New York Mets after Luis Rojas' departure
23dBradford Doolittle and David Schoenfield
Mets move on from Rojas after 3rd-place finish
23d
Mets likely to make Rojas decision before others
27d
MLB Power Rankings: Where all 30 teams stand in the final week
27dESPN.com
Mets give Syndergaard start, shut deGrom down
29d
Your squad isn't going to the MLB playoffs? The No. 1 offseason question for each eliminated team
23dBradford Doolittle
Passan's early MLB free-agency tiers: Which stars are going to get paid this winter?
28dJeff Passan
MLB Power Rankings: Where all 30 teams stand as playoff picture comes into focus
34dESPN.com
Prospects who have taken the biggest step forward in 2021 for all 30 MLB teams
36dKiley McDaniel
Aug 25, 2010 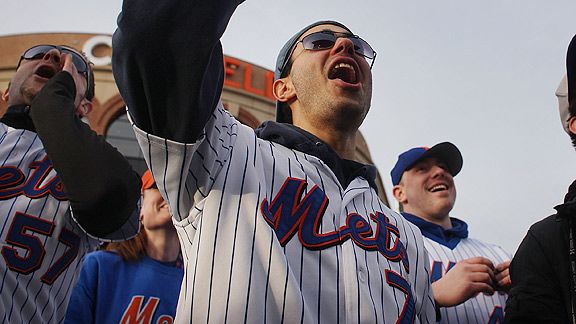 The Mets have frustrated their fans repeatedly over the last four seasons, but they continue to try to believe in their team.

So by now you've probably read Adam Rubin's series on the current state of the Mets organization, and its probably left you a little depressed.

Yet if your fanhood is strong, we'd hope that you'd stick by your team. With that in mind, we asked some of the biggest Mets fans we know -- bloggers and others here at ESPN -- why they continue to root for the Mets.

A lot of it is habitual. We root for laundry, so we know no better. We also know that if we hang around, that it’s worth the frustration to get to the good times. My relationship with the Mets is a love story, with shades of masochism thrown in. I think some fan bases are envious of us: they would have given up a long time ago.

Why do I still care about this team? Because I don't have a choice. I was born to be a Mets fan -- one of my earliest memories is my mom jumping up and down and hollering after Rusty Staub hit a big home run -- and they've been a daily part of my life, with a few unhappy interruptions, since I was seven years old.

It's like Lamarckian evolution -- for better and for worse, I am what I am because I'm a Mets fan. Though OK, sometimes I do think it's not too late for my own son, and I should tell him to flee while he can.

I continue to root for the Mets because that’s what being a Mets fan is all about. Growing up as a Mets fan in a town surrounded by Yankee fans I lived to defend the Amazins. Time and time I have believed this was our year and time and time they have fallen short of my expectations.

But despite the disappointment, frustration, and constant ridicule from other fan bases, I know it will all be worth it when they finally win one.

Mets fans suffer from a psychosis known as "Lack of Self Esteem". Why do people stay in loveless marriages, why do disgruntled employees stay in jobs the hate, and why do Met fans keep coming back for more? Heck, just across the Whitestone Bridge is 27 championships, it's not like we don't have choices.

But to be a true Mets fan one has to live in the shadows of life. Live with a constant inferiority complex. And be pessimistic by nature. How else can you be devoted to a franchise that turned a walk-off postseason grand slam into a single, traded Ryan for Fregosi and will be paying Bobby Bonilla for the next 2 decades.

Yes to be a true Mets fan one always has to live life waiting for the next shoe to drop. This franchise cannot even get its damn mascot right, a GIANT HEAD, just the opposite of a Mets fans personality.

Force of habit, mostly. I wouldn't know how to not root for this team. And when things turn around, nobody will be asking such questions. The memory of the undeniably good and the promise that it will be that great again is the unspoken incentive to hang with 'em. With any luck (and a little decent management), we're living in the "before" picture. I'd like to imagine things look much better in the "after" version.

I root for them because I am an optimist. Ya' Gotta Believe is engrained in my heart. Maybe because my dad was a Brooklyn Dodgers fan I am more willing to say "wait 'til next year" than "to hell with this." winning doesn't require a miracle, it requires an organization that functions as a unit. I believe that some day that will happen again for my Mets.

Because individual pieces are solid and they've got to get it together eventually (right? right).

Because the designated hitter is as bad an idea as Canadian bacon and pineapple on pizza.

I love the Mets because they are my team. Not yours, not Fred's and not Jeff's. I rooted for Joe Torre's teams, watched a Met scrub named Mike Scott go to Houston and scare the bejesus out of us, saw a miracle and I'll put up with the crap until I see another one. I didn't need Yankee championships in 1977 and I don't need them now.