Terry Collins: 'Obviously we miss David'
7yAdam Rubin
A fans guide to abiding the LOL Mets
12dDevin Gordon
Jeff Passan answers 20 burning questions about the MLB playoffs
12dJeff Passan
What's next for the New York Mets after Luis Rojas' departure
14dBradford Doolittle and David Schoenfield
Mets move on from Rojas after 3rd-place finish
14d
Mets likely to make Rojas decision before others
19d
MLB Power Rankings: Where all 30 teams stand in the final week
18dESPN.com
Mets give Syndergaard start, shut deGrom down
20d
Your squad isn't going to the MLB playoffs? The No. 1 offseason question for each eliminated team
14dBradford Doolittle
Passan's early MLB free-agency tiers: Which stars are going to get paid this winter?
19dJeff Passan
MLB Power Rankings: Where all 30 teams stand as playoff picture comes into focus
25dESPN.com
Prospects who have taken the biggest step forward in 2021 for all 30 MLB teams
27dKiley McDaniel
Jul 2, 2014

ATLANTA -- Asked to sum up a road trip in which the Mets lost six of seven games, Terry Collins steered the conversation directly to the absence of David Wright.

“Obviously we miss David,” Collins said after the Braves completed a three-game sweep of the Mets at Turner Field with a 3-1 win Wednesday. “We miss David’s bat in the lineup. There’s no doubt. It kind of spreads out things a little differently. 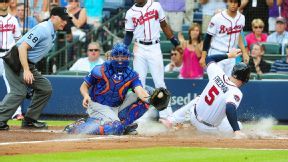 “We competed as good as we can compete. We went out and played hard.”

With the Mets unable to post runs against Julio Teheran and Atlanta’s bullpen, a three-run first by the Braves proved insurmountable.

Jacob deGrom allowed a first-pitch single to B.J. Upton, then walked Andrelton Simmons and Freddie Freeman. DeGrom nearly escaped by striking out Justin Upton and retiring Jason Heyward on a shallow fly ball. But on the seventh pitch of an at-bat to Chris Johnson, he smoked a grounder past third baseman Eric Campbell’s backhand for a three-run double.

“I think it went above my glove. I haven’t taken a look at it,” Campbell said. “I would have liked to have knocked it down. I haven’t looked at the replay. I was turning my head, so I don’t know what really happened.”

Said deGrom: “The two walks didn’t help me to load the bases. And then I made some big pitches to get to two outs. And then I tried to go with a changeup because he was fouling everything off. I wanted to go low-and-in and left it right over the middle. That was pretty frustrating.”

DeGrom suggested he was overthrowing after allowing the leadoff single.

“I think I was a little amped up,” he said. “I was maybe trying to overthrow it a little in the first. The first pitch of the game, a base hit, and then I think I tried to do a little too much there and got a little wild.”

So the Mets now return home with a 37-48 record and trailing the division-leading Braves by 10 games.

Collins cut off a postgame question about the standings and suggested they’re not relevant until September.

“I’m going to tell you something: We have to quit worrying about the standings,” the manager said. “We’ve got to start winning. That takes care of everything. If you look at the standings, it isn’t going to help. You’ve got to go play.”

Collins added: “We’re getting beat, but we’re in games. We just can’t get over the top. If we’re looking up and we’re getting beat by four or five runs a night, I’d probably have something different to say. … I think there was a game the other day when we finally beat the A’s, it was the first time at home we’ve won a game by more than two runs in a month. Win or lose, we’re in the ballpark. We just can’t finish it off.”

Collins said he does expect Wright to return Friday. The captain has remained active, with the Mets playing a man short for six games. Wright was not even at Turner Field for the Braves series. Instead, he was in New York getting treatment.

“I think if there was any doubt at all, they would have probably disabled him,” Collins said. “But I think they know he’s going to play. They said, ‘You’re just going to have to get through the Atlanta series and he’ll be ready.’ I certainly plan on having him there.”