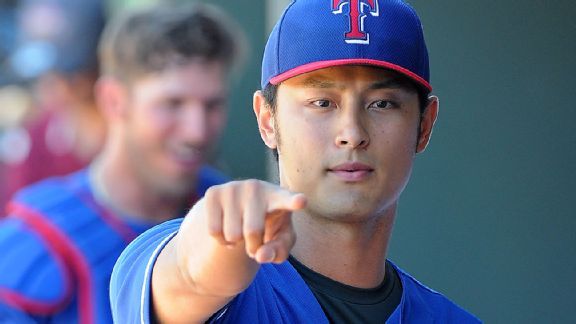 • With rain delaying the start by 56 minutes and threatening to interrupt Thursday’s Rangers series finale in Baltimore, manager Ron Washington decided to delay Yu Darvish’s scheduled start until Friday, pushing him into the Mets series. There never was a stoppage once the game began at Camden Yards.

Darvish, 27, has an MLB-best 11.04 strikeouts per nine innings. He ranks third in the American League in ERA at 2.42, trailing only the Mariners’ Felix Hernandez (2.10) and Yankees’ Masahiro Tanaka (2.27). Darvish snapped a two-start losing streak by tossing eight scoreless innings against the Minnesota Twins on Saturday.

Fielder, who had season-ending surgery for the neck issue on May 27, had been acquired during the offseason from the Detroit Tigers with $30 million for Ian Kinsler. Texas reportedly will recoup 50 percent of Fielder’s salary via an insurance policy that carried over from the Tigers, after a 90-day deductible period.

• With Fielder and Moreland out, Carlos Pena has taken over at first base. He is hitless in his last 18 at-bats and 3-for-33 since joining the club. Pena, 36, originally signed a minor-league contract on June 17. He had been idle since being released by the Los Angeles Angels from spring training on March 23.

• The Rangers have lost five straight and 14 of 17. They have lost nine straight road games, their longest skid away from Arlington since 2005, when Buck Showalter managed the club during a nine-game road skid. They are 11 games under .500 for the first time since finishing the 2007 season at 75-87. 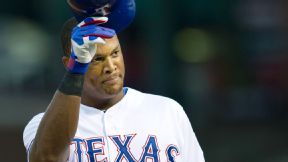 Adrian Beltre is the one lethal weapon in Texas' decimated lineup.

• Adrian Beltre hit .392 in June, the highest figure in any month of his career. The average trailed only Houston’s Jose Altuve (.411) in the American League for the month. Overall, he is hitting .335 this season, second to Altuve in the league.

• Shin-Soo Choo signed a seven-year, $130 million deal with Texas on Dec. 13. He is hitting .254 with eight homers and 30 RBIs and has a .374 on-base percentage. Choo returned to the leadoff spot last Friday after two weeks in the No. 3 hole.

• The Rangers designated left-hander Joe Saunders (0-5, 6.13 ERA) for assignment on Tuesday. Miles Mikolas, who had been acquired from the Pittsburgh Pirates in December, stepped into the rotation.

• Mikolas’ promotion and insertion into the rotation pushed scheduled Wednesday starter Nick Tepesch into the Mets series … at least originally. Tepesch was due to start Friday, but has been dropped in place of Darvish. He now is the most likely candidate to start Sunday, in what is currently listed as TBA, unless he is needed in long relief before then. Tepesch has a 1.93 ERA over his past three starts. The Rangers will keep Colby Lewis on Saturday, as originally planned.

• The Rangers’ 4.62 ERA is the highest in the American League. They nonetheless have an AL-best 14 shutouts. They became the first AL team to reach that shutout total within 80 games since the 1968 Cleveland Indians, five years before the designated hitter came into effect.

• Closer Joakim Soria has allowed runs in consecutive appearances for the first time this season. He still has 17 strikeouts and one walk in his past 10 appearances. Former All-Star closer Neftali Feliz is currently pitching in Triple-A as he enters the final stages of a return from Tommy John surgery.

• Before a 3-for-4 performance Thursday at Baltimore, shortstop Elvis Andrus has been hitless in his last 10 at-bats and 5-for-his-last-30.

• Left fielder Michael Choice is hitless in his last 14 at-bats and 5-for-his-last-66.

• Catcher Robinson Chirinos has caught an MLB-high 19 would-be base stealers.

• Rangers assistant GM A.J. Preller is due interview with the San Diego Padres regarding their vacant GM position.