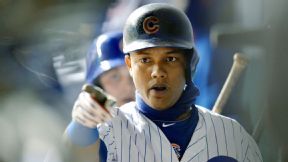 Starlin Castro should be available next offseason, if not sooner, with the Cubs now loaded at shortstop.

NEW YORK -- With the Chicago Cubs now flush with shortstops, count Keith Hernandez among those not in favor of the Mets attempting to acquire incumbent Starlin Castro.

The Cubs acquired A's top prospect Addison Russell during the weekend and assigned the 20-year-old shortstop to Double-A. They also have 21-year-old Javier Baez at Triple-A, where is hitting .241 with 13 homers and 50 RBIs in 290 at-bats.

"We've seen enough of Castro to know that he's just too unreliable, too loose," Hernandez said during Sunday's Mets-Rangers telecast on SNY.

When partner Gary Cohen noted that Castro also does not exactly subscribe to the Mets' hitting philosophy, Hernandez added: "That aside, he's too lackadaisical in the field for my liking. I want the Mets to get guys that are hard-nosed, come to the ball yard every day and put their 100 percent in. And I don't think Castro does that. I've seen enough of him."