NEW YORK -- Reigning NL co-Player of the Week Jacob deGrom was nearly perfect into the seventh inning Saturday. Jake Peavy was perfect during that span.

And then the Mets pounced on Peavy to give deGrom a win for the fifth straight start.

After Peavy retired the first 19 batters he faced, the Mets exploded for four seventh-inning runs en route to a 4-2 win against the wild-card-leading San Francisco Giants at Citi Field.

DeGrom (6-5) took a no-hit bid into the seventh inning, when Pablo Sandoval produced a two-out double. The rookie right-hander ultimately surrendered a two-run single to pinch-hitter Travis Ishikawa and departed in the eighth with one out and the Mets still leading by two runs. 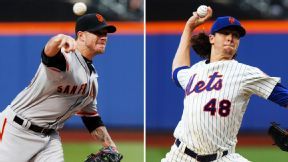 Neither Jake Peavy nor Jacob deGrom allowed a hit until the seventh inning Saturday.

DeGrom's 6 2/3 innings and Peavy's 6 1/3 innings marked the deepest both starting pitchers carried a no-hitter since Gavin Floyd against Ted Lilly in an all-Windy City battle on June 13, 2010, according to the Elias Sports Bureau. That double no-no ended when Alfonso Soriano had a two-out double in the bottom of the seventh for the Cubs. On April 2 of this season, Milwaukee's Matt Garza (6 2/3 innings) and Atlanta's Aaron Harang (6 innings) had dueling no-nos, too.

He has allowed only four runs in 34 2/3 innings over his past five starts.

Until Ishikawa’s two-run single, deGrom was poised to become the first major league rookie since Matt Cain and Justin Verlander in 2006 to make five straight starts of at least six innings while allowing one run or fewer in each outing.

Entering Saturday, deGrom's past four starts each featured one earned run or fewer and at least six innings, which matched the second-longest streak in franchise history, regardless of experience. R.A. Dickey went six straight games of at least six innings and one run or fewer allowed in 2012. Of course, Dickey allowed only one unearned run total over the final five starts during that stretch and set a franchise record with 32 2/3 consecutive scoreless innings.

DeGrom also ran his streak without allowing a homer in 66 1/3 innings, which topped Mark Bomback (60.1 IP in 1980) for the franchise rookie record.

Peavy retired the first 19 Mets before allowing a one-out opposite-field double to Daniel Murphy in the seventh. The shot appeared catchable, but left fielder Michael Morse took a less-than-ideal route, and the ball cleared his head. David Wright followed with the Mets’ second hit by dropping a single in front of Morse, and Lucas Duda was hit by a pitch. Suddenly the Mets had the bases loaded in the scoreless game.

Travis d'Arnaud followed with a sacrifice fly, Juan Lagares contributed an RBI single, and Wilmer Flores produced a two-run double to give the Mets a 4-0 lead.

DeGrom retired the first 14 batters he faced. He then got ahead in the count 1-2 to Brandon Belt before losing him and issuing a walk for the game’s first baserunner. DeGrom nonetheless carried a no-hit bid two outs into the seventh, until Sandoval laced a two-out double to left-center.

It was the longest no-hit bid by a Mets pitcher since Bartolo Colon retired 20 straight in Seattle way back on July 23.

DeGrom had plenty of help behind him to get to that point.

Lagares raced into the left-center gap and made a leaping catch at the edge of the warning track on Belt’s shot to left-center to end the top of the second inning. Eric Young Jr. made a sliding catch at the left-field foul line to retire Sandoval to open the top of the fifth. Buster Posey narrowly hit a grounder foul down the third-base line with one out in the seventh. Giants manager Bruce Bochy left the dugout to chat with third-base Jeff Kellogg, but the play was not reviewable.

Peavy entered the start with the lowest run support in the majors this season (between the Boston Red Sox and Giants), at an average of 2.74 runs per game. That helps to explain his arriving at Citi Field having lost a career-high 10 straight decisions.

Peavy had plenty of help to take the perfect-game bid into the seventh. In the third inning, first-base ump D.J. Reyburn initially ruled deGrom safe at first base with an infield single to shortstop, but it was overturned on replay. Hunter Pence made a sliding catch in foul territory down the right-field on Flores’ fly ball to open the bottom of the sixth, which deprived Flores of the continuation of that at-bat. Immediately preceding Murphy’s double, Curtis Granderson gave the ball a ride to the track in right-center, and Pence ran it down to open the bottom of the seventh.