Rapid Reaction: Mets 6, Nats 1
7yAdam Rubin
Carrasco has bone fragment removed from elbow
3d
A fans guide to abiding the LOL Mets
17dDevin Gordon
Jeff Passan answers 20 burning questions about the MLB playoffs
17dJeff Passan
What's next for the New York Mets after Luis Rojas' departure
18dBradford Doolittle and David Schoenfield
Mets move on from Rojas after 3rd-place finish
19d
Mets likely to make Rojas decision before others
23d
MLB Power Rankings: Where all 30 teams stand in the final week
23dESPN.com
Mets give Syndergaard start, shut deGrom down
25d
Your squad isn't going to the MLB playoffs? The No. 1 offseason question for each eliminated team
19dBradford Doolittle
Passan's early MLB free-agency tiers: Which stars are going to get paid this winter?
24dJeff Passan
MLB Power Rankings: Where all 30 teams stand as playoff picture comes into focus
30dESPN.com
Prospects who have taken the biggest step forward in 2021 for all 30 MLB teams
32dKiley McDaniel
Aug 5, 2014

WASHINGTON -- To say Zack Wheeler walked a tightrope would be an understatement. Regardless, he ended up barely scathed on the scoreboard … and a winner.

Wheeler faced a pair of baserunners aboard and none out in four of the seven innings he worked and had high early pitch counts (46 through two innings, 65 through three innings). Yet he somehow managed to limit Washington to one run in 6 2/3 innings as the Mets produced a 6-1 win against the first-place Nationals on Tuesday night.

The Amazin's won for only the second time in their last dozen games against the Nats. With 49 games remaining, the Mets (54-59) now trail Washington by seven games.

Wheeler issued three walks and a wild pitch in a rocky second inning, but limited the damage to one run in that frame. 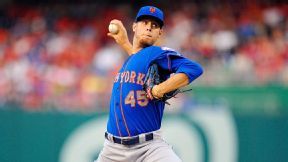 Zack Wheeler allowed one run in 6 2/3 innings Tuesday against Washington.

Thanks! A pair of Nats plays on the bases helped Wheeler improve to 4-0 with a 1.59 ERA in his past seven starts.

A half-inning after the Mets took a 2-0 lead on Wheeler’s two-out bloop single in front of sliding right fielder Jayson Werth, Wheeler loaded the bases with three walks in the second. With No. 8 hitter Jose Lobaton batting, Wheeler then uncorked a wild pitch that got the Nats on the scoreboard and advanced Ian Desmond to third base and Asdrubal Cabrera to second base.

Lobaton then hit what should have been a run-scoring groundout to shortstop. However, the grounder struck Cabrera as he was running to third base. He was ruled out. And Desmond, who was racing home, was forced to return to third base on the dead ball. Wheeler ultimately stranded Desmond there. He ended the 33-pitch inning by coaxing a flyout from opposing pitcher Gio Gonzalez.

Still clinging to that 2-1 lead in the sixth, Wheeler surrendered a leadoff double to Werth. Adam LaRoche then singled to left field, and Nats third-base coach Bob Henley waved home Werth. Making only his second major league start in left field, natural infielder Eric Campbell threw out Werth for his second career outfield assist. A replay review initiated by the crew confirmed Travis d'Arnaud had not improperly blocked the plate.

Campbell also had an outfield assist May 22 against the Los Angeles Dodgers. That happened to be Campbell’s only other major league start in left field. That time, Yasiel Puig was doubled off second base on Hanley Ramirez's lineout.

Adding on: The Mets finally got some breathing room in the seventh.

After Gonzalez departed with a pair of Mets on base and none out, Wheeler laid down a sacrifice bunt against Drew Storen. Juan Lagares was drilled with a pitch in the left arm to load the bases. And Daniel Murphy followed with a two-run single passed Cabrera’s backhand at second base as the Mets took a 4-1 lead. Lucas Duda added an RBI single later in the frame.

Had the recently acquired Cabrera been able to field Murphy’s grounder on the arguably makeable play, the Nats may have escaped with an inning-ending double play, still only trailing by a run.

Ouch: Lagares received an escort off the field from trainer Ray Ramirez and Terry Collins after appearing to twist his left ankle -- and possibly landing on an arm -- on an inning-ending catch in the seventh that stranded a runner at third base. Lagares remained in the game.

Audition flop: Getting a rare start against a left-hander, Duda went 0-for-3 against Gonzalez with two groundouts.

Welcome back: In his return to the majors, Kirk Nieuwenhuis had a pinch-hit RBI single in the eighth against Blake Treinen that staked the Mets to a 6-1 lead.