WASHINGTON -- After a fourth straight underwhelming performance since returning from the disabled list, Jonathon Niese insisted he feels healthy.

Niese allowed six runs in six innings, including homers to Adam LaRoche and Danny Espinosa, in the Mets’ 7-1 loss to the Washington Nationals on Wednesday.

The southpaw instead suggested improper pitching mechanics before the All-Star break were causing shoulder irritation. So he has revised his mechanics. But he’s now struggling to locate pitches with the revised motion and just needs more bullpen work to get things sharper. 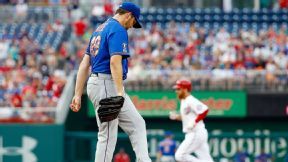 Adam LaRoche rounds the bases after a first-inning homer against Jon Niese.

Niese is 0-for-4 with a 5.76 ERA since missing a start on the DL with shoulder soreness.

“No pitcher wants to go out there and pitch with a sore shoulder,” Niese said. “You’ve got to figure out a way to make the arm feel better. And I did. But now I just have to figure out how to locate my pitches.”

Even though he was having statistical success before landing on the DL, Niese said he had drifted into some bad habits. So he now is back to striding farther with his landing leg, “which changes my arm slot,” he said.

Said Niese: “I’m kind of opening up a little bit more. I was a closed too much. So I’ve opened up. Now I’m able to release the ball out front more instead of on the side.”

“It’s easy to talk about the shoulda, woulda couldas when you’re struggling. I shouldn’t say struggling -- things aren’t going well,” Niese said. “I’m at the point now where my stuff is back. My arm feels great. I’m not very consistent hitting my spots. I’m just having a couple bad innings where I give up two or three runs. ...

“When I didn’t feel 100 percent was when I was pitching the best. But now that I changed my mechanics a little bit, my arm feels a lot better. So I’ve got to figure out how to pitch with that.”