FIRST PITCH: Bartolo Colon may not be going anywhere until the offseason anyway, but whether he is eligible to be traded this month remains to be determined.

ESPN’s Jayson Stark reports that while Curtis Granderson is currently on waivers, the Mets have not yet put Colon through the process.

If a player is claimed, the Mets can dump the contract on that team, work out a trade, or pull the player back. Pulling the player back makes him ineligible to be dealt this month. If a player clears waivers, he can be dealt without restriction in August. 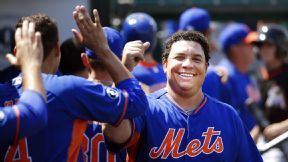 Bartolo Colon takes his second crack at career win No. 200 on Friday in Philly.

Two pitchers have notched No. 200 as a Met: Orel Hershiser and Martinez.

• Carlos Torres surrendered a walk-off two-run homer to Bryce Harper in the 13th as Washington beat the Mets, 5-3, in Thursday’s rubber game. Torres has allowed five homers in eight innings over his last seven relief appearances.

Jenrry Mejia tossed one inning, but no more, because of calf stiffness.

Jacob deGrom had a quality start (three runs in six innings). The NL Rookie of the Month for July came away with a no-decision as his five-game streak of winning starts ended.

Juan Lagares departed on a double-switch in the eighth, and Terry Collins expressed no reservations.

• Read more on Mejia’s cranky calf in the Post, Daily News, Star-Ledger, Newsday and at MLB.com.

• Columnist Mike Vaccaro in the Post wonders about Collins’ future. The manager is under contract for next season. Writes Vaccaro:

Too many games have played out this way, truth be told, with him making some truly head-scratching decisions. Look, if most of them worked, you would salute his gut and his guts, and he would be praised for some unconventional thinking. But that’s the chance you take. And plays like [Eric] Young [Jr.]’s offer further evidence that Collins probably went too far to the other side after spending his early managerial years as a self-admitted tyrant. There seems little to fear inside the Mets clubhouse.

At this point, he deserves the rest of the season. He deserves another job in the organization, back in player development, where his true talent lies. But when Harper’s ball sailed over the Samuel Adams sign, it effectively ended the Mets for 2014, and put everyone on the clock for 2015. That ticking starts in the manager’s office.

Can we officially be done with the silly talk that has lingered about the Mets making some late-season run at the playoffs?

The Mets can stop the pretending now.

BIRTHDAYS: John Hudek was born on this date in 1966.

If deGrom was on the #Angels or #Athletics, he'd win 30 games this year. #deGrominant #Mets

YOU’RE UP: Should the Mets promote Noah Syndergaard now?