Rapid Reaction: Mets 5, Phillies 4
7yAdam Rubin
Carrasco has bone fragment removed from elbow
7d
A fans guide to abiding the LOL Mets
22dDevin Gordon
Jeff Passan answers 20 burning questions about the MLB playoffs
22dJeff Passan
What's next for the New York Mets after Luis Rojas' departure
23dBradford Doolittle and David Schoenfield
Mets move on from Rojas after 3rd-place finish
23d
Mets likely to make Rojas decision before others
28d
MLB Power Rankings: Where all 30 teams stand in the final week
28dESPN.com
Mets give Syndergaard start, shut deGrom down
29d
Your squad isn't going to the MLB playoffs? The No. 1 offseason question for each eliminated team
24dBradford Doolittle
Passan's early MLB free-agency tiers: Which stars are going to get paid this winter?
29dJeff Passan
MLB Power Rankings: Where all 30 teams stand as playoff picture comes into focus
35dESPN.com
Prospects who have taken the biggest step forward in 2021 for all 30 MLB teams
37dKiley McDaniel
Aug 8, 2014

PHILADELPHIA -- Bartolo Colon joined exclusive company as the Philadelphia Phillies continued a season in which they’ve become the team to beat up on.

The 41-year-old Colon recorded career win No. 200 as the Mets beat the Phillies 5-4 in Friday’s series opener at Citizens Bank Park.

Colon departed with a 5-1 lead after eight innings. After Dana Eveland allowed the first two batters of the ninth to reach, Jenrry Mejia converted the save -- barely.

Mejia, who had experienced lower-back tightness Monday and calf tightness Thursday, allowed a single to Marlon Byrd that loaded the bases with none out. He then allowed a two-run double to Grady Sizemore. Cody Asche eventually contributed a run-scoring groundout for the second out, but Mejia left the tying run at third base by striking out Reid Brignac.

Colon joined Juan Marichal (243 wins) and Pedro Martinez (219) as the only Dominican-born pitchers to reach the 200-win plateau. 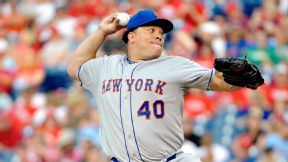 There are only two active pitchers with more wins than Colon: Tim Hudson (213) and CC Sabathia (208).

According to the Elias Sports Bureau, only three pitchers in the past 90 years have notched win No. 200 when they were older than Colon: Tim Wakefield (age 45), Charlie Hough (44) and Jamie Moyer (42).

The Mets improved to 9-4 in the season series against the Phillies. The Amazin’s have won 11 of their past 13 games at Citizens Bank Park.

A.J. Burnett surrendered 11 hits -- matching Atlanta’s Julio Teheran on July 8 for the most a starting pitcher has allowed against the Mets this season. Burnett departed trailing 5-0 after six innings.

He managed to keep the game scoreless by coaxing a bases-loaded groundout from Lucas Duda in the third. Travis d'Arnaud, Kirk Nieuwenhuis, Juan Lagares and Wilmer Flores then consecutively produced hits to open what became a four-run fourth. Over that two-inning span, eight Mets in a 10-batter stretch reached base against Burnett. (And, really, it’s 8 of 9 reaching, since Colon’s strikeout shouldn’t count, right?)

A fifth-inning solo homer by d’Arnaud, who originally was drafted by the Phillies, upped the lead to 5-0. (D’Arnaud was traded to Toronto for Roy Halladay, who threw out Friday’s ceremonial first pitch.)

Colon took a scoreless effort into the seventh inning.

After a leadoff single by Chase Utley in the fourth, Colon survived consecutive shots from Ryan Howard and Byrd that settled into Lagares’ glove just in front of the 401-foot marker on the center-field wall. Byrd’s leadoff homer in the seventh finally got Philadelphia on the scoreboard.

Ouch: Plate ump Mike Winters was struck by a pitch from Burnett in the first inning. He completed the game with a huge welt on his right wrist.