Montero call-up planned for deGrom
7yAdam Rubin
Carrasco has bone fragment removed from elbow
1d
A fans guide to abiding the LOL Mets
16dDevin Gordon
Jeff Passan answers 20 burning questions about the MLB playoffs
16dJeff Passan
What's next for the New York Mets after Luis Rojas' departure
17dBradford Doolittle and David Schoenfield
Mets move on from Rojas after 3rd-place finish
17d
Mets likely to make Rojas decision before others
22d
MLB Power Rankings: Where all 30 teams stand in the final week
22dESPN.com
Mets give Syndergaard start, shut deGrom down
23d
Your squad isn't going to the MLB playoffs? The No. 1 offseason question for each eliminated team
18dBradford Doolittle
Passan's early MLB free-agency tiers: Which stars are going to get paid this winter?
23dJeff Passan
MLB Power Rankings: Where all 30 teams stand as playoff picture comes into focus
29dESPN.com
Prospects who have taken the biggest step forward in 2021 for all 30 MLB teams
31dKiley McDaniel
Aug 11, 2014

PHILADELPHIA -- Rafael Montero is expected to be called up to fill in for Jacob deGrom on Tuesday against the Washington Nationals, a source confirmed to ESPNNewYork.com.

The Mets are not prepared to announce the decision until deGrom is examined in New York later Monday. DeGrom has a sore shoulder.

Terry Collins insisted Monday morning that Montero would not be activated if deGrom avoids the DL. Instead, the Mets would handle a spot start in-house. 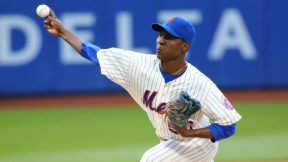 Rafael Montero is expected to start Tuesday in place of Jacob deGrom.

Montero told Dominican journalist Hector Gomez in Spanish: "I learned very much in the little time I was in MLB. I hope to stay up the rest of my career. I have worked hard to be here. I'm coming off two very good starts. I feel like I'm in my best physical form of the whole year."

Montero, 23, went 0-2 with a 5.40 ERA in four major league starts in May. He arrived with a reputation as a strike-thrower, but nibbled and walked 11 in 20 innings.

Montero was selected over Noah Syndergaard as well as using Carlos Torres for a spot start.

Montero was due to pitch Monday for Triple-A Las Vegas, so the start for the Mets will come on an extra day of rest.

He has tossed 14 2/3 scoreless innings over his past two Pacific Coast League starts, allowing a combined four hits and four walks while striking out 17. Overall, he has made four starts since missing more than a month due to a strained left oblique.