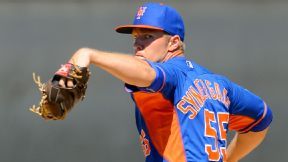 Noah Syndergaard may not be a Met until 2015.

PHILADELPHIA -- There's a decent chance Noah Syndergaard's major league debut may wait until 2015, although it apparently has not yet been formally determined, a team insider told ESPNNewYork.com.

The reasoning: Triple-A Las Vegas is going to be playoff-bound for the second straight year. And Syndergaard may not have innings left after that postseason experience.

Even with missing time for shoulder and elbow injuries, Syndergaard enters Tuesday's Pacific Coast League start at 108 innings this season, including one inning in the Futures Game. He totaled 118 2/3 innings with his Futures Game work in 2013. So he probably has about 40 innings remaining this season.

Uninterrupted, Syndergaard would have four regular-season starts remaining for Vegas, plus at least one playoff start.

Would the Mets call up Syndergaard in mid-September for one appearance -- if that -- before shutting him down? Or is it more sensible just to wait until next year given the exhausted innings?

Syndergaard does need to be added to the 40-man roster this offseason to shield him from the Rule 5 draft. So tying up a 40-man roster spot is not an impediment to a September call-up, since he needs to be added soon thereafter anyway.