Rapid Reaction: Mets 3, Cubs 2
7yAdam Rubin
Carrasco has bone fragment removed from elbow
5d
A fans guide to abiding the LOL Mets
20dDevin Gordon
Jeff Passan answers 20 burning questions about the MLB playoffs
20dJeff Passan
What's next for the New York Mets after Luis Rojas' departure
21dBradford Doolittle and David Schoenfield
Mets move on from Rojas after 3rd-place finish
21d
Mets likely to make Rojas decision before others
26d
MLB Power Rankings: Where all 30 teams stand in the final week
26dESPN.com
Mets give Syndergaard start, shut deGrom down
27d
Your squad isn't going to the MLB playoffs? The No. 1 offseason question for each eliminated team
22dBradford Doolittle
Passan's early MLB free-agency tiers: Which stars are going to get paid this winter?
27dJeff Passan
MLB Power Rankings: Where all 30 teams stand as playoff picture comes into focus
33dESPN.com
Prospects who have taken the biggest step forward in 2021 for all 30 MLB teams
35dKiley McDaniel
Aug 15, 2014

Wheeler remained unbeaten in nine starts since June 25 as the Mets beat the Chicago Cubs, 3-2, in Friday’s series opener at Citi Field.

After a pair of walks to open the bottom of the fourth, Eric Campbell bashed a three-run homer against left-hander Travis Wood as the Mets (58-65) overcame an early 2-0 deficit.

Jeurys Familia and Jenrry Mejia shut down the Cubs over the final two innings. The Mets won despite producing only four hits. 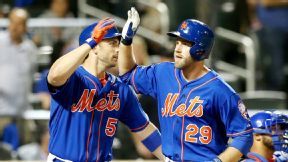 Wheeler improved to 5-0 with a 2.02 ERA in his past nine starts. He limited the Cubs to two runs on four hits and four walks in 6 2/3 innings. He struck out 10 in a career-high 120-pitch effort. It marked his third career double-digit strikeout game.

His lone issue is an inability to go deep into games because of high pitch counts, in part fueled by the walks. Wheeler has not completed seven innings in any outing during his nine-game unbeaten streak. He has issued 11 walks in 19 1/3 innings in his past three starts.

The damage Friday came in the third on a run-scoring groundout by Anthony Rizzo and RBI single by Starlin Castro. Wood, albeit a solid-hitting pitcher, walked to lead off that inning.

Snapped: David Wright's 13-game hitting streak ended with an 0-for-3 night that included one walk. Wright had one extra-base hit during that stretch.

Late-game replacement: Ruben Tejada handled the final two innings at shortstop over Wilmer Flores after walking as a pinch hitter.

Ouch: Travis d'Arnaud was clocked with Javier Baez's backswing on the Cubs rookie’s foul pop-out in the fifth. D’Arnaud remained in the game after a visit from Terry Collins and trainer Ray Ramirez.