Wheeler remains unbeaten since June 25
7yAdam Rubin
Carrasco has bone fragment removed from elbow
7d
A fans guide to abiding the LOL Mets
21dDevin Gordon
Jeff Passan answers 20 burning questions about the MLB playoffs
21dJeff Passan
What's next for the New York Mets after Luis Rojas' departure
22dBradford Doolittle and David Schoenfield
Mets move on from Rojas after 3rd-place finish
23d
Mets likely to make Rojas decision before others
27d
MLB Power Rankings: Where all 30 teams stand in the final week
27dESPN.com
Mets give Syndergaard start, shut deGrom down
29d
Your squad isn't going to the MLB playoffs? The No. 1 offseason question for each eliminated team
23dBradford Doolittle
Passan's early MLB free-agency tiers: Which stars are going to get paid this winter?
28dJeff Passan
MLB Power Rankings: Where all 30 teams stand as playoff picture comes into focus
34dESPN.com
Prospects who have taken the biggest step forward in 2021 for all 30 MLB teams
36dKiley McDaniel
Aug 15, 2014

NEW YORK -- Zack Wheeler wants to get more efficient with his pitch count. What he's providing now is pretty darn good, though.

Wheeler limited the Chicago Cubs to two runs on four hits and four walks and struck out 10 in 6 2/3 innings as the Mets won, 3-2, Friday at Citi Field. Wheeler, who tossed a career-high 120 pitches, improved to 5-0 with a 2.02 ERA in his past nine starts. Now 8-8, he reached .500 for the first time this season. He has not completed seven innings in any start during that unbeaten stretch, though. 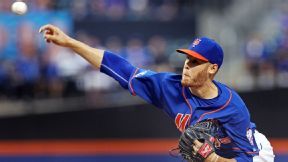 Zack Wheeler is 5-0 in his past nine starts.

"Any pitcher, you want to get through seven -- at least -- if not deeper," Wheeler said. "It's unfortunate that my pitch count throughout the season has been high. That's something that I'm definitely going to look at during the offseason and try to figure something out."

On Friday, Wheeler was at 59 pitches and had produced five strikeouts through three innings. He ultimately got more efficient and came within one out of completing seven innings for the first time since tossing a three-hit shutout at Miami on June 19.

Terry Collins said ideally Wheeler would not have exceeded 115 pitches. But the manager let him have one more batter after he struck out the opening two Cubs in the seventh. Chris Coghlan then walked, prompting Collins to insert Vic Black for the final out of the frame.