Montero possibly heads down on high note
7yAdam Rubin
Carrasco has bone fragment removed from elbow
7d
A fans guide to abiding the LOL Mets
21dDevin Gordon
Jeff Passan answers 20 burning questions about the MLB playoffs
21dJeff Passan
What's next for the New York Mets after Luis Rojas' departure
23dBradford Doolittle and David Schoenfield
Mets move on from Rojas after 3rd-place finish
23d
Mets likely to make Rojas decision before others
28d
MLB Power Rankings: Where all 30 teams stand in the final week
27dESPN.com
Mets give Syndergaard start, shut deGrom down
29d
Your squad isn't going to the MLB playoffs? The No. 1 offseason question for each eliminated team
23dBradford Doolittle
Passan's early MLB free-agency tiers: Which stars are going to get paid this winter?
28dJeff Passan
MLB Power Rankings: Where all 30 teams stand as playoff picture comes into focus
34dESPN.com
Prospects who have taken the biggest step forward in 2021 for all 30 MLB teams
36dKiley McDaniel
Aug 17, 2014

NEW YORK -- Assuming Jacob deGrom returns from the disabled list to start next weekend at Dodger Stadium and Rafael Montero heads to Triple-A until September, Montero should depart feeling upbeat.

“No doubt about it,” manager Terry Collins said after Montero limited the Cubs to one run on five hits in 7 1/3 innings in the Mets’ eventual 2-1 loss on Sunday. “No matter what happens here in a few days, certainly he’s got to be happy with the way he threw today and his confidence has got to be pretty high.” 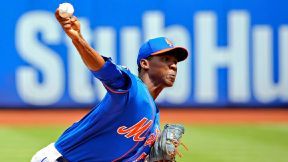 Montero was spared a hard-luck loss when Curtis Granderson produced a game-tying RBI single in the eighth inning. Still, Montero is 0-3 in his young career. He became only the third pitcher in franchise history to have not produced a win in his first six career starts, joining deGrom and Chris Schwinden.

Montero had shied away from his changeup in previous outings, having used it only 9.6 percent of the time in his other five starts. He threw it on 24 of 105 pitches Sunday -- more than double the previous rate.

“The changeup was one of my best pitches today,” he said through an interpreter. “I was throwing it for a strike, so I continued to use it and it was effective.”

Said Collins: “We had heard his changeup was outstanding, and today he showed it. He showed great use of it, great location with it. I thought he pitched an outstanding game. It was really good for him to have a game up here where he knows he can be successful.”