Rapid Reaction: Mets 6, Phillies 5
7yAdam Rubin
Carrasco has bone fragment removed from elbow
5d
A fans guide to abiding the LOL Mets
19dDevin Gordon
Jeff Passan answers 20 burning questions about the MLB playoffs
19dJeff Passan
What's next for the New York Mets after Luis Rojas' departure
20dBradford Doolittle and David Schoenfield
Mets move on from Rojas after 3rd-place finish
21d
Mets likely to make Rojas decision before others
25d
MLB Power Rankings: Where all 30 teams stand in the final week
25dESPN.com
Mets give Syndergaard start, shut deGrom down
27d
Your squad isn't going to the MLB playoffs? The No. 1 offseason question for each eliminated team
21dBradford Doolittle
Passan's early MLB free-agency tiers: Which stars are going to get paid this winter?
26dJeff Passan
MLB Power Rankings: Where all 30 teams stand as playoff picture comes into focus
32dESPN.com
Prospects who have taken the biggest step forward in 2021 for all 30 MLB teams
34dKiley McDaniel
Aug 31, 2014

Anthony Recker produced a tie-breaking three-run homer against A.J. Burnett in the sixth inning Sunday, and the New York Mets held on to beat the Philadelphia Phillies 6-5 at Citi Field.

The victory prevented the Mets (64-73) from dropping into last place in the NL East for the first time since June 27. 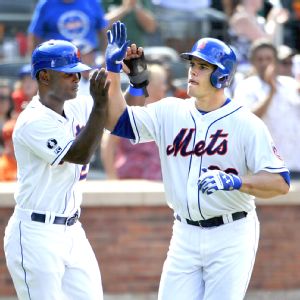 Recker, whose three-run shot staked the Mets to a 5-2 lead, now has 12 career long balls. Nine of those home runs have tied the score or given his team a lead, including four of five this season.

Jeurys Familia surrendered a solo homer to Domonic Brown in the eighth inning as Philadelphia (62-74) pulled to within 5-4. Dilson Herrera's first career RBI in the bottom half of the inning restored a two-run cushion for Jenrry Mejia, who needed the insurance. Mejia notched his 21st save despite allowing a run in the ninth.

In the seventh, Dana Eveland allowed a runner inherited from starter Dillon Gee to score, but left a pair of Phillies in scoring position by retiring Chase Utley on a pop-out and consecutively striking out Ryan Howard and Grady Sizemore.

Not him again: Gee must have nightmares about Howard, right? Howard’s solo homer in the sixth against Gee evened the score at 2. Earlier, Howard’s RBI double in the fourth opened the game’s scoring -- although Gee left the bases loaded in that frame by coaxing a double-play grounder from Wil Nieves.

Howard is hitting .423 with seven home runs and 16 RBIs in 26 career at-bats against Gee.

Howard also is the active leader in long balls against the Mets with 41, ahead of a pair of his Phillies teammates -- Utley (33), and No. 3 Jimmy Rollins (30).

Halted! David Wright snapped a career-high 14-game RBI-less drought when his two-out single in the sixth against Burnett plated Matt den Dekker and staked the Mets to a 2-1 lead. Wright’s previous high without an RBI had been 13 straight games in Aug. 2010.

Wright’s hit also gave the Mets seven in the game. That snapped a streak of 10 straight games at Citi Field with six hits or fewer, which had matched the longest home streak in the majors since 1900, according to the Elias Sports Bureau.

Den Dekker’s RBI double had pulled the Mets even at 1.

Three cheers: Wilmer Flores went 3-for-4 and also recorded his first career stolen base, although a good throw from the Nieves would have nailed him at third base. It marked the third time Flores produced that career-high three-hit total.