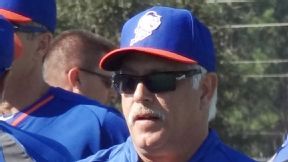 Wally Backman will join the Mets next Friday.

NEW YORK -- Wally Backman will be a major league coach for the final nine games of the season.

Backman, who guided the Las Vegas 51s to their second straight division title in the Pacific Coast League, is due to join the Mets in Atlanta next Friday and be with the club for the remainder of the season.

Backman has a career .519 winning percentage (798-741) in 13 minor league seasons with the White Sox, Diamondbacks and Mets organizations.

The 51s have posted consecutive 81-63 records under Backman and then been bounced in the first round of the Triple-A playoffs.

The Mets typically add a minor-league manager or coach after rosters expand.