McHugh reflects on Mets tenure, ascent
7yAdam Rubin
A fans guide to abiding the LOL Mets
14dDevin Gordon
Jeff Passan answers 20 burning questions about the MLB playoffs
14dJeff Passan
What's next for the New York Mets after Luis Rojas' departure
16dBradford Doolittle and David Schoenfield
Mets move on from Rojas after 3rd-place finish
16d
Mets likely to make Rojas decision before others
20d
MLB Power Rankings: Where all 30 teams stand in the final week
20dESPN.com
Mets give Syndergaard start, shut deGrom down
22d
Your squad isn't going to the MLB playoffs? The No. 1 offseason question for each eliminated team
16dBradford Doolittle
Passan's early MLB free-agency tiers: Which stars are going to get paid this winter?
21dJeff Passan
MLB Power Rankings: Where all 30 teams stand as playoff picture comes into focus
27dESPN.com
Prospects who have taken the biggest step forward in 2021 for all 30 MLB teams
29dKiley McDaniel
Sep 23, 2014 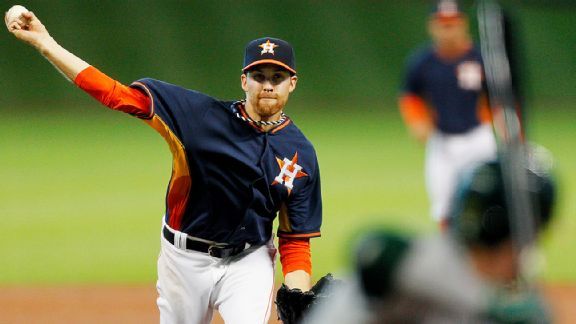 Collin McHugh's career has taken off with the Houston Astros.WASHINGTON -- Ex-Met Collin McHugh's triumphant return to Citi Field will not include pitching against his former club.

Although McHugh was lined up for the season-ending weekend series, the Houston Astros have shut down the 27-year-old right-hander because of an innings cap. While compiling an 11-9 record and 2.73 ERA in 25 starts, McHugh has logged 154 2/3 innings. That’s a jump of 15 2/3 innings over 2013, which he split between the Mets and Rockies and their minor-league affiliates.

“I'm proud of the work both myself and our team have done this season,” McHugh told ESPNNewYork.com. “It would have been a fun and somewhat ironic ending to this unique season to be able to pitch in New York, but the way it lines up, I guess I get to sit back a little bit and take it all in. It should be pretty cool.

“Even just coming and seeing the park and being there from a different perspective, I think it’s going to be fun and interesting and I’m sure a mix of emotions and all that kind of good stuff. I have a lot of good buddies on that team. It should be a fun series.”

McHugh, an 18th-round pick in 2008 out of Berry College in Georgia, was traded by the Mets to Colorado for Eric Young Jr. on June 18, 2013. He went 0-3 with a 9.95 ERA in four starts for the Rockies and was claimed off waivers by the Astros in December. McHugh had a chance to briefly see Matt den Dekker this season when Houston was playing in the Bronx. He also keeps in touch with Zack Wheeler.

“If I don’t talk to them personally, I try to keep up with how they’re doing as the season goes along, too,” McHugh added. “It’s been cool to see [Travis] d’Arnaud and Wheeler and [Wilmer] Flores and [Juan] Lagares and then remember what they were like in Savannah and down in the lower levels.”

Had the Astros stayed in the National League for another year, McHugh would have been neck and neck with Jacob deGrom in the Rookie of the Year conversation. Instead, McHugh may receive limited votes on an American League ballot with three slots for voters to fill out and a slew of candidates that include slam-dunk winner Jose Abreu as well as Masahiro Tanaka, Dellin Betances, Yordano Ventura and Marcus Stroman.

“I try not to think about those things,” McHugh said. “None of those things are in my hands. Truthfully, it’s a nice honor if you get it. I wish Jake the best. He’s been unbelievable this year. He really has. If he throws against us, I really want to see him throw in person. It’s been since probably St. Lucie that I’ve seen him throw.”

McHugh and deGrom appeared lined up to pitch on Saturday. DeGrom, too, is facing an innings cap and the Mets have yet to declare whether he will make a final start, or whether Rafael Montero will take that final turn.

McHugh went a combined 0-8 with an 8.94 ERA in 15 starts (nine appearances) with the Mets and Rockies in 2012 and ’13. And that includes a no-decision in which he tossed seven scoreless innings for the Mets against the Rockies at Citi Field in his major league debut.

So where did this wild success come from?

“I don’t look at it as one key,” McHugh said. “I think more than anything it’s just learning who I am as a pitcher, being able to refine a little bit what I do, the pitch selection. A lot of talk is going around about scrapping my two-seamer and going to all four-seam fastballs. And that’s true. I’m pretty much exclusively four-seam fastballs this year. But I think more than anything it’s development -- learning from my mistakes in the past, what works and what doesn’t work. And then, honestly, it’s getting an opportunity to go out there and do it every five days.”

McHugh is one of the most literate and thoughtful players you will find in a baseball clubhouse, and that is reflected in his personal blog, “A Day Older, A Day Wiser.” McHugh has candidly chronicled his life through the minor leagues and now the majors.

He wrote on Jan. 2 on the blog, recalling how he received the news from the Mets of the trade to the Rockies:

They thanked me for my service and wished me luck. It felt like getting dumped. Like the pretty girl at the dance finally realized she didn't have to dance with you anymore. The Mets were family to me. Six years of building relationships with the guys and their wives and kids all washed away in the span of a 35-second phone call.

I looked over at my wife in the back seat of my parents' car and we both felt that first tear crawl down our cheeks. We would officially not be living in NYC. Not be hanging out with Greg [Burke], Kai [Gronauer], [Daniel] Murph[y], or any other teammates and their significant others. We would be moving across the country and leaving everything that resembled security and safety. It all hit us in that moment and we silently wept in the car, holding hands and internally managing whatever expectations were building inside of us.

We celebrated my birthday the following evening and braced ourselves for what was certainly going to be a crazy next three months. By the next morning I was in Tulsa, Oklahoma, playing for the Rockies’ Double-A affiliate in the Texas League.

McHugh’s in-season posts have been infrequent this year, which he explained was because of the rigors of a major league season, including on the four days between starts.

McHugh’s latest entry was on May 14. He noted that he used to fret after a bad start about whether he would be demoted or worse, and that he placed too much pressure on him as a result. This year, partly because of a commitment from the Astros to let him develop, he heaped less pressure on himself. McHugh wrote:

Before, in my career, I would worry that one bad outing would define me. That if I pitched poorly I would get sent down, and if I got sent down or designated enough, teams would have a bad opinion of me. It was a self-fulfilling prophecy. I would pitch poorly (because, as we already said, everyone does at some point), freak out that it was the end, heap more and more pressure on, only to find myself back on the mound again fighting for my baseball life. It was unsustainable and draining in every way.

My wife and I, over the course of our five years of marriage/baseball, have tried really hard to fight that mentality. We prayed for patience and perspective, and practiced living it out as often as possible. But until this season I wasn't sure if it had really sunk in.

Said McHugh: “Kind of the furthest thing from my mind right now when I go out there is, ‘Am I going to have a spot? Am I going to have a spot?’ I think part of that is the culture they kind of built around this year [with the Astros], that we’re interested in developing you. We’re interested in developing you as a baseball player. We’re interested in having you here, to be a part of this club, to do really good things in Houston. And I think the other part of that is confidence. You get a little confidence rolling and you just want to keep it rolling.”